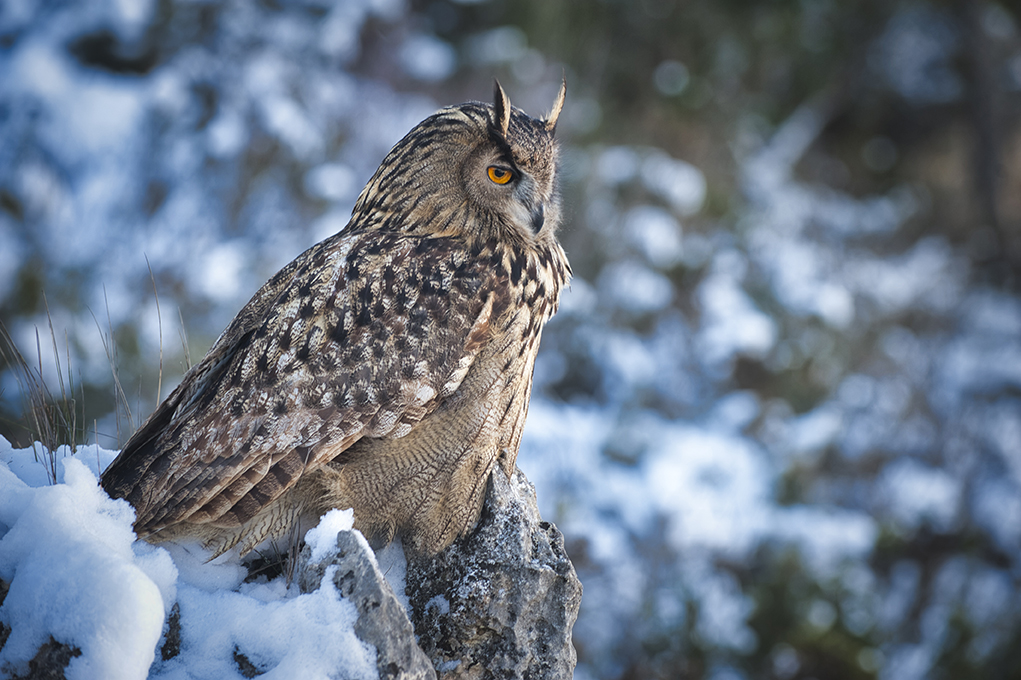 Winter has fully touched the Caroig mountains and a white blanket of snow covers its hills and crests. I am in the heart of a huge region, possibly one of the wildest and most remote areas of the Valencian Country.
I arrive in the vicinity of the Caroig peak, which gives its name to this colossal Massif. Up there, the thermometer shows -8ºC, it is 2:00 p.m. on December 20, 2009. Days ago, near the summit, at a strategic point in the forest, I built a refuge to be able to ‘capture’ an eagle owl in its usual innkeeper with my camera. They are a couple of beautiful birds which I have been controlling for about two years. The idea that was going through my head this time was to be able to photograph it in a pure, winter environment, and the occasion had come, because a breeze of polar air was sweeping the peninsula.

I rush into the shelter, the cold is becoming unbearable and I have to hurry to prepare the photographic material.
Once everything is set, I can only wait for the ‘Lord of the night’ to arrive at the rock, where he usually perches before starting his hunting raids, right before the last and weakest rays of sunlight.

The eagle owl is the largest and most powerful of our Iberian birds of prey, and popular culture took it upon itself to mythologize it in its legends and superstitions for many years, since its nocturnal habits and its enigmatic and silent appearance have always caused people to be suspicious of it, always associating him with demons and evil spirits that inhabited the forest. Formerly, it would not be surprising that in some of the places of this mountain range, perhaps by Navalón, by the Peñon de los Machos (in the nearby Sierra de Enguera), near the Caroig peak or by the Júcar River Canyon, you will hear the deep and gloomy howling of the eagle owl that surely, to the shepherds and woodcutters of yesteryear once made their hair stand on end. Fortunately, nowadays these useless beliefs are dismissed, the men of the countryside know how to appreciate and protect these inhabitants of the mountain forest, where they set up their nests and perches in rocky cliffs that offer them shelter and absolute control of the land at their feet. His heat occurs in the first months of winter where the song of the male when claiming the female can be heard from great distances and, I can assure you that there is nothing more exciting and shocking than hearing his gloomy hoot resounding in the immensity of these mountains on a cold and icy winter night.
Suddenly, a strong wind hits the canvas of my hiding place and brings me back from my reverie, where I realize how lonely it is around me. I find myself in the middle of an ice desert, with the night falling on top of me.

But, the «Prince of darkness» as they sometimes call him, makes his appearance at the perfect moments to be immortalised by my camera.

The satisfaction is enormous, and this gives me additional strength to quickly dismantle the shelter and start walking, well into the night.