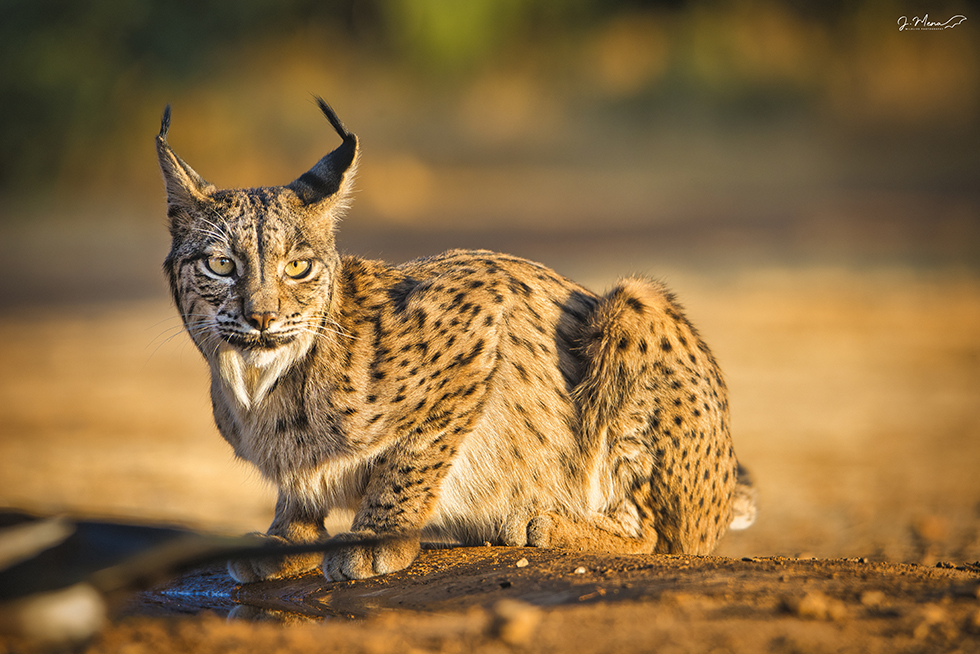 Photograph of Iberian lynxes in the wild and native fauna, on a sunny day in late August. Penalajo.

Peñalajo, in the northernmost foothills of Sierra Morena, already in the province of Ciudad Real, due to its high density in its populations of partridges and wild rabbits, has become one of the most important enclaves within lynx conservation programs Iberian, which as we know is the most endangered feline that exists on the planet.

This natural area, which, as we have already mentioned, is the last gasp of Sierra Morena, is characterized by having low mountain ranges of Mediterranean dehesa and dryland forest, well preserved, isolated from all human activity and with abundant scrub and undergrowth, habitat main of the Iberian lynx.

It is a feline much larger than a domestic cat. It is characterized by its robust appearance, its long legs and its short tail with a black tassel at the end, which it usually keeps upright by flapping it in moments of danger or excitement.

Its ears are finished off with characteristic brushes made up of rigid black hairs whose purpose is possibly to decompose the round silhouette of its head, thus favoring its mimicry.

Also characteristic are the sideburns that hang from his cheeks and progressively increase in size with age. The juveniles of a few weeks lack sideburns and almost brushes and in one-year-old individuals the sideburns already appear, although short, barely hanging below the chin. Males have longer sideburns than females. The soles of its legs are wide and padded and allow it to move silently. Its coloration varies from brown to greyish with the flanks mottled with black.

He is an agile hunter. He sneaks up on the piece and quickly jumps on it. It is the only carnivore considered to be a specialist in catching rabbits, although depending on the time of year it can also feed on ducks, ungulates, small mammals and birds such as partridges.

It lives solitary and nomadic, being more sociable in the mating season, which begins between January and February. At this time of the year it usually stays with its partner, but the rest of the year, the lynx is an animal of solitary habits. The burrows are made in well-protected and hidden places such as rocks, hollow trees, etc.

Gestation lasts 62 or 63 days, after which the female gives birth to an average of 2 pups. It is the mother who takes care of the little ones. At four weeks she usually changes burrow, and at two months the young are able to accompany their mother on hunts. In autumn, the dispersal phase begins, during which juveniles leave their home territory.

In 1966, the lynx was declared a protected species. In 2002, it was recorded that there were less than 50 adult individuals left in two isolated nuclei in Andalusia. Among the causes of the decline of the population are the decline of the wild rabbit, the main food of the lynx, the destruction of the Mediterranean forest, inbreeding, poaching or abuse.

The European project LIFE “Lynx Connect” is the fourth conservation project for the species. It has an investment of 18 million euros to interconnect the different areas of reintroduction of the Iberian lynx, improving its habitat and the genetic and demographic management of this feline.

The data from the last lynx census in the Iberian Peninsula is really encouraging, with a total of 1,365 individuals, an increase of 22.62% compared to the 2020 census. Having exceeded a thousand Iberian lynx individuals living in freedom is a great success for conservation in Spain and in the world. Few species are capable of escaping such a critical situation as the lynx, which has gone from “Critically Endangered” to “Endangered”.

However, the World Wildlife Fund insists that we must continue fighting to remove this species from the danger of extinction in which it lives.

According to WWF, the lynx would no longer be threatened with at least 3,000/3,500 individuals and 750 would have to be females capable of reproducing. From this organization they have been working for the conservation of the lynx for two decades, specifically since its creation. From the NGO they have been in charge of maintaining custody agreements with 18 farms, of developing work to improve habitat and recover rabbit populations.