Grazing in the Enguera mountains I 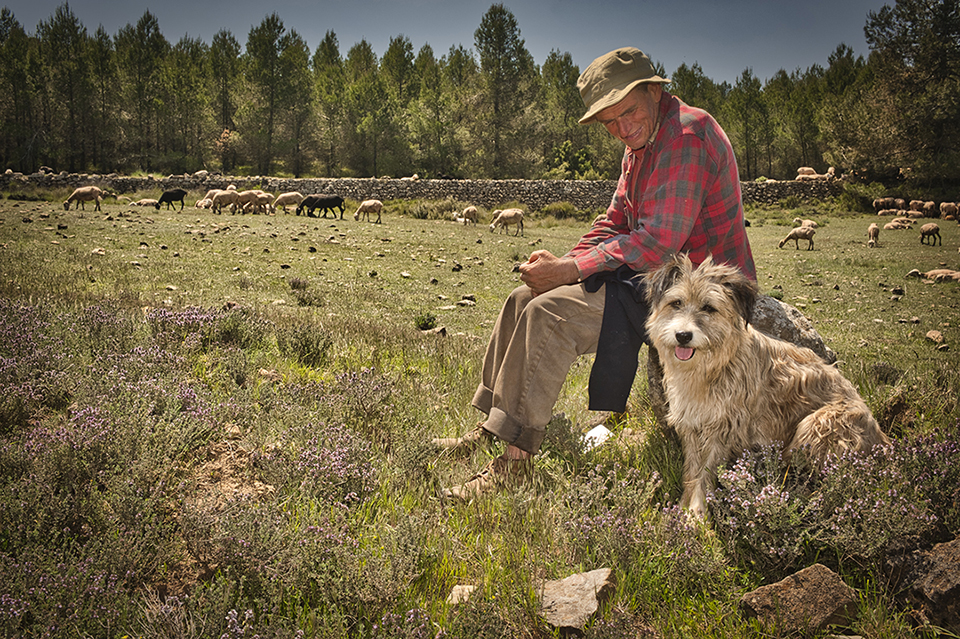 Grazing in the Enguera mountains I

The herds of Luís Chorques are distributed throughout the Sierra de Enguera1 and Ayora. This rancher, along with his wife and daughter Elvira Chorques, who is a veterinarian, have some 10,000 head of cattle, with several salaried shepherds who work for him, carrying out treacherous routes throughout the Sierra de Enguera to Ayora throughout the year: Navalón- Benali, Benali-Ayora/Alpera, Navalón-Fontanars. He usually alternates them according to the months, walking from one place to another, in order to leave the natural regeneration of the grass and contribute to keeping our mountains and our forests healthy.

On this occasion, I accompany one of its shepherds, Miguel, who in this spring season walks through the area of ​​La Matea, between Enguera and Ayora. On this farm between the Collados, Casa del Alto and Casa de La Matea, this herd spends the year until the following spring, when they go down to the La Redonda corrals to meet with the different herds scattered around the mountains for shearing.

The morning passes peacefully, where as the herd passes through ravines and mountains, we have been able to hear the spring song of the cuckoo that announces long and bright afternoons. We are surprised by the fluttering, near Casa La Matea, of the woodpecker with its shrill call, as well as the squawks of the jays. Nature explodes in its vital splendor, animals announce good weather and seek mating. Suddenly the sky presents us with one of its best gifts: not too high up you can see, with your hand on your forehead to avoid the strong sun, the silhouette of the majestic flight of the golden eagle, which flies over these immense and desolate mountains in search of of some prey.

In the afternoon dense and thick clouds form. With the first drops of rain, the stone manso in front of the herd with its imposing pickaxe, rushes out to seek refuge in the cave of La Salna to protect itself until the storm passes.
Miguel takes with him two dogs, with the curious names of Marta and Rebolera, one of a woman and another appropriate to the case.

On this occasion we accompany Luís Chorques through the La Matea area, located between Ayora and Enguera. We are in the month of March and you want to look for the first rays of sun after the harsh winter. This area was perfectly documented by the botanist Cavanilles, without a doubt the Valencian clergyman fell in love with its landscape, as we do now:

“Caroche is found as if in the center of a desert, and stands out among the mountains that surround it. At four and six leagues away it seems greater in height than in its surroundings… Caroche can be considered as the center and point of union of the mountains scattered throughout the Kingdom of Valencia. Let us now note the links between Caroche and the southern mountains of the kingdom. It joins along this course with the Bicorp millstone, Cueva Horadada and Solana de Ayora, which extends to the port of Almansa. Two mountain ranges descend from here, forming that valley which we said extends five leagues to San Felipe; through the southern mountain range it joins the port of Almansa and the mountains of Font de la Figuera… To the north there are two hours from Teresa to Xalance, and almost in the middle of these towns is Xarafuel… ”

1 The Sierra de Enguera covers an area of ​​24,025 hectares, most of which is occupied by a forest mass of 4,140 hectares. of scrub and 13,793 hectares. of trees, completing with areas of irrigated and rainfed crops. It is divided into three zones: La Redonda, Los Altos and Navalón. It is a true paradise for nature lovers, as we find some forests that survived the devastating forest fire of 1979, which was the largest in the history of Spain. In addition to pine forests and holm oaks, we will find extensive olive groves and various springs of pure and crystalline waters, such as “Fuente Huesca”, “La Tejedora”, “La Matea”, “Los Pilones”, etc. We will also find peaks from which we can contemplate magnificent panoramic views, such as “Los Altos de Salomón”, “El Arenal”, “El Matamoros”, “Alto de las Muelas” or “Peñón de los Machos”.

Miguel tells me how the dogs the day before “killed a snake over 2 meters long, black and with a head like a fist, it even had hair on its mane.”