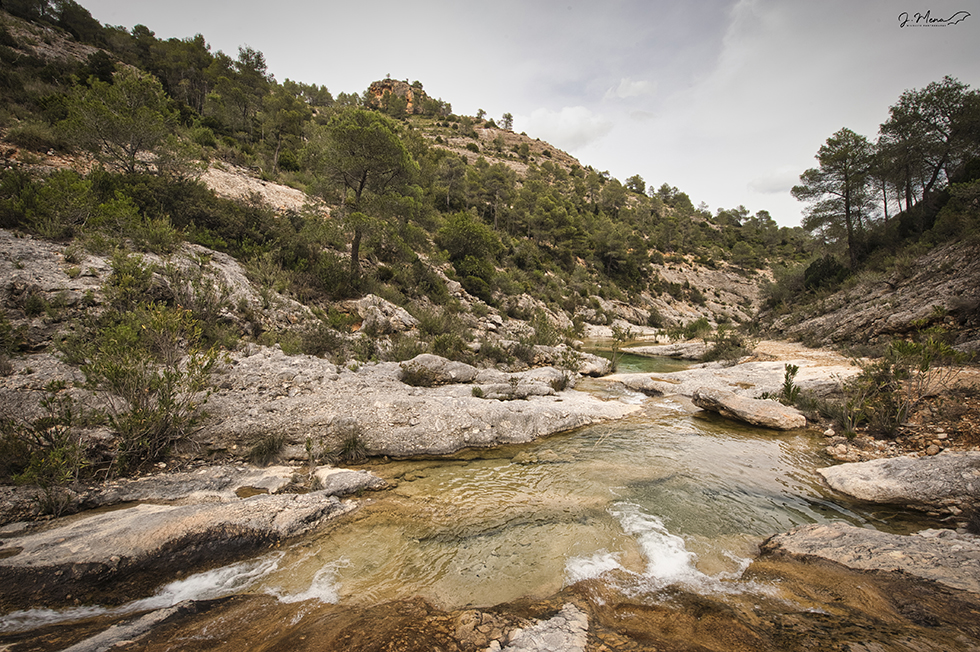 The Cazuma, whose waters supply the town of Bicorp, is one of the three rivers that, together with the Fraile River and the Ludey River, cross its municipal term, to flow into the Escalona River. The PR-V 234 route, also known as the Río Cazuma- la Gola de Lucino route, is a beautiful route in the very heart of the Caroig Massif, where near its source we find a spectacular canyon or gorge that impresses with its majesty, a fascinating place, in which geological whims have followed one another through the centuries, there the water of the river has been carving and shaping the rock.

Along this route of approximately 16 km, at heights that range between 510 meters and 415 meters and always accompanied by a beautiful forest reserve of great environmental and landscape value, we find abundant undergrowth vegetation, holm oak bushes , junipers, olive trees, carob trees and junipers.

On the margins of the river bed, a great variety of fossils can be seen embedded in the limestone rocks. Numerous pilgrim shells of various sizes indicate that, in ancient times, these lands were bathed by the waters of a sea populated by molluscs and marine animals. A sedimentation process in those shallow waters fossilized some of those species.

Among the varied fauna that inhabits these places we can highlight the encounter with mountain goats, the cunning fox, wild boars, a large population of rabbits and hares, the flight of the golden eagle, the short-toed eagle, along with numerous forest birds. With the last rays of the sun, it is the nocturnal birds that take over the night landscape with their songs, the tawny owl, the little owl and above all the eagle owl, whose deep ululation I was lucky enough to hear in the middle of the afternoon, when I was crossing the narrow crack of the Gola de Lucino.

It is worth highlighting the fauna linked to the same course of the river, plagued by innumerable dragonflies, where four species stand out: The collared snake, the viperine or water snake, the green frog and the leprous pond turtle, the latter a true jewel of our Valencian rivers of Mountain.

One of the most interesting points of this route is located in the enclave of the Barranco de Hongares, the Cuevas de la Araña show us through their cave paintings, a vestige of how Neolithic man lived and to which we will soon dedicate an entry in this Blog.