The last shepherds of Caroig 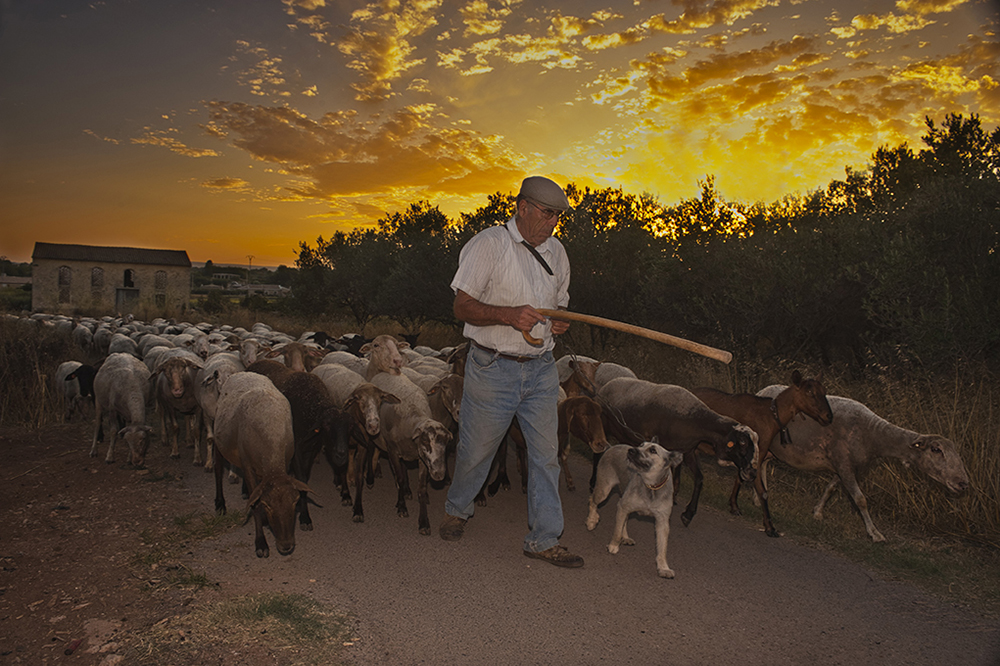 The last shepherds of Caroig

This article aims to show a brief introduction to the work I have done as a photographer in these lands, which will bring us closer to some unique characters who have gone unnoticed in our history, who have lived their lives in the silence of the roads and mountains. They have contributed to leaving an important mark on our culture and heritage. Anonymous, unknown and marginal beings for most of society, but enormously attractive to the eyes of the beholder. We are talking about shepherds, country men who breathe the joy of living freely with nature…where their attributes are loneliness, sacrifice, walking…through the mountains where they earn a living with their cattle, of which they are slaves and to whom they have decided to give their lives. The shepherd always has his eyes fixed on nature to scrutinize its designs. Look carefully at the sky to beg the rains that make the pastures green; the fist gripping the old cane tightly and, sometimes only accompanied by the dim light of a cigarette well into the night. In winter there are days of everything, good and bad. The cold and heat are endured as one can, “because in this office the air conditioning and heating come in and out from all sides, well, it’s open doors,” says Ramón, a pastor from Navarrés, with an ironic smile.

Thus, whether in good or bad weather, with cold or snow, with rain or with a suffocating sun, the hard days will pass along the trails, where the shepherd sometimes almost has time to pay attention to his tired body, since he must always be aware that the herd finds pasture, water and does not go beyond the limits marked by the branches. And at the end of the day it will sleep in the middle of the field, under the stars”.

Men accustomed to open spaces, wide horizons, clean, without limits; to walk a thousand paths. With a mobile vision, not captive or limited of landscapes and people, with an open, free and cultured mind, seasoned in a thousand experiences.

The shepherds, without them knowing it, without feeling like actors and without giving importance, have starred in a unique story. The tragedy is that as they age and disappear, we discover new benefits of their knowledge about the environment and the art of herding, which, with them, are lost forever, and that is precisely why we are indebted to their efforts. However, they have received very little from society, only misunderstanding, suspicion, marginalization. They follow more for love of the trade and tradition than for profitability; only subsidies from the European Union help them maintain a difficult balance. Now, grazing needs our help to adapt to the new times and become more attractive to young people who are looking for a freer lifestyle in contact with nature. Without a doubt, it will no longer be grazing as we know it. All modern conquests would adhere to it, be they GPS, or others like cameras built into the backs of goats. Be that as it may, the need for the sheep to continue making their daily exodus will depend, in part, on our food and quality of life.

During these years, Jose Mena has followed different shepherds1 of these mountains and has captured some snapshots that, due to their value, can be demanded in a short period of time. Some beautiful photographs that will remain for history. His photographic work has focused on one of the most important forest areas of the Valencian Community, the mountains of the Macizo del Caroig, rugged, wild… considered one of the most lonely and uninhabited regions of Europe. In this remote place, some shepherds still survive, many of them already over 70 years old and to the point of leaving the trade that, due to lack of generational change, may be forgotten. Therefore, it was an inexcusable duty on his part, to prepare a notarial certificate of the latest adventures of the last Caroig shepherds, recording with his camera and accompanying them throughout the seasons, adapting to their rhythm, capturing with subtle delicacy, as an entire world and a wisdom, that of those who still live connected to the cycles of nature, is sinking because of an aggressive progress that does not respect anything or anyone. Therefore, this work not only intends to show a grazing culture of a certain place, but it is also a work where the author intends to blame our civilization that has arrogantly believed itself above nature itself. It’s like not too, an invitation to know and respect the world that surrounds us, to tell the “urbanites” that not far away, there is a different “universe”, an oasis of peace where we can glimpse a different possibility of life.

1 Luís Chorques in the Sierra de Enguera, Ramón García in Navarrés, Jose Vicente Ortiz around the Caroig peak and the brothers Amando and Jose Avendaño in the Sierra de Tous are the main shepherds of this work.

2 In which I have tried to make known to many people this unknown pastoral world that is definitely coming to an end. I have tried to convey all my experiences, emotions and sensations just as I have felt them at the time when accompanying them through these immense, overwhelming and spectacular landscapes, living with them, snowstorms and rain, dreamy sunrises… I have seen them leave the rainbow after a spring storm. As Jordi Tutusaus also said in his book Mil anys pels camins de l’herba, I feel lucky to have been able to see and experience the end of a great story, of an ancient tradition that has suddenly been lost forever.

I find myself in a meadow lost within the immense wooded area of ​​the Caroig Massif. Thousands of sheep used to bleat in the pens scattered around these mountains. After many years in these remote lands photographing their last shepherds and their natural environment, fauna, flora and landscape, I have come to the end of my work2. Satisfied to have carried out a task that was not easy. There have been many days that I have shared with them, where they have told me thousands of stories, happy, sad, of sacrifices, their knowledge and traditions that go back centuries. The immense value of these first-hand testimonies is priceless, considering that grazing as it has always been done has entered the 21st century, mortally wounded. I have accompanied them on what may be their last trips along the bridle paths that cross the heart of the massif in search of the best pastures for their herds, true transhumant routes through this immense natural sanctuary, a journey that began eight thousand years ago first shepherds of the Stone Age.

I come to this place every time I get nostalgic for the herds and, of course, to enjoy this isolated, rugged and wild space, here I find calm and tranquility, away from the worries of the city, like The authors of the book Landscapes of Caroig say well: “Paradoxically, silence is the value that most surprises and gratifies us. It seems impossible, in this society, to get away from the hustle and bustle produced by all the Hunaba activities: traffic, industries and even leisure, invade every corner of our lives. To the point that there doesn’t seem to be a single corner where you can escape from it. In this quality is where the Caroig acquires an essential importance, in our way of understanding the landscape. Because the lands of the Caroig are one of those There are few places where it is still possible to hear silence, that thick and profound sensation of silence, leaning against a hundred-year-old olive tree, sitting on any rock or walking along trails order in these immensities, that “no noise” is perceived, only courted by the sound of the wind, the chirping of birds or the trampling of some mouflon… and our own breathing“.

Jose Vicente Ortiz, is the last shepherd of Caroig and spends 365 days a year in these parts. There is no rush or stress. He never asks me what I want and when I leave, nor when I have to come back. There is a certain complicity. We sat on a rock with our backs to the top. A slight breeze transports us the aromas of the Mediterranean mountain. Pebrellas, rosemary, thyme, mint fill the atmosphere of these mountains. The aroma of the pines mixes with the humid smells of rivers and shaded areas. Night falls and the sky fills with stars, in the forest, at the bottom of the valley we hear the pitiful and anguished howling of the tawny owl, a nocturnal bird known in these lands by the name of caro. Jose Vicente knows that he is the last link in a saga of shepherds, and although he is still young, he has been in these lands for many years. However, despite the hardness of the job and his complete dedication to the goats, his calm gaze, wide smile and his gestures, reveal to me that he is happy here and that he does not yearn for other worlds. A few meters below we see the goats locked in their pen. They also remain calm, they have no enemies, the wolves disappeared more than a century ago. It is completely dark now and the moon is beginning to peek in the east. In this immensity and surrounded by forests and meadows we remain silent for a long period, we only hear the sounds of the cowbells coming from some distant herd.

How many times, when returning after a hard day’s shepherding, has he told me how bad everything is going and that he resists more for the love of his profession than for anything else… I, absorbed in my thoughts and with a lost look in the dark of night, I ignore him, and I think that maybe the day after sunrise I can relive all the unforgettable moments of these last years.