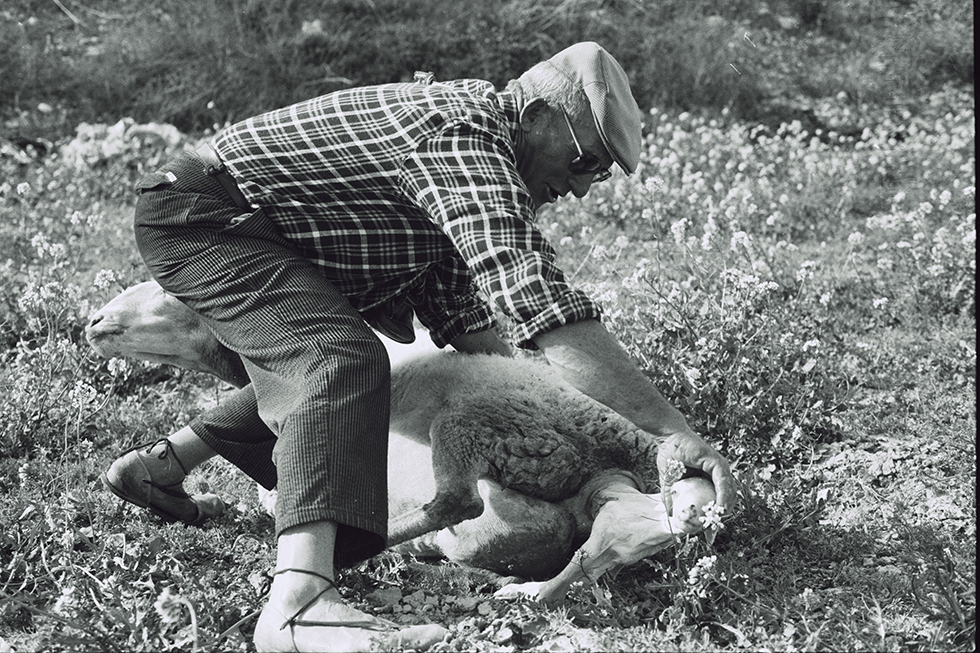 In 1994 I made a photographic report on the last pastor of Castelló, aware at that time of the importance of the inevitable fact of the disappearance of a profession doomed to oblivion and absorbed by progress.

Thank you Ramon. I have been privileged and I will always feel grateful for your kindness and that you have shared with me some of your secrets.

Ramon Aviñó Martínez is currently (2007) 77 years old, and now retired he looks back on his life and, with the satisfaction of having done what he loved the most, states: “I have been a truly happy man doing what I have done, the job of shepherd ”. His work bears witness to times past, but lives on in the memory of all of us who have come across a flock of sheep on the street or in the fields that made us stop. In that past memory, time had another value; that is, we could lose it, something unthinkable today in a saturated and stressed world, where it is impossible to perceive the passing of life and of time itself.

His is a family with a long tradition in the world of livestock. He affirms that his grandfather and his father, Ramon Aviñó Gascó, were already shepherds. His is not just another job, but the fruit of a vocation loved and still longed for by him. At the age of 4, he was already going with his father to take out the herd, since he had no chance to study: “I don’t know anything about that at school”; but nevertheless, he soon acquired the true wisdom that life gave him along paths full of solitude where he was invited to reflection and in continuous contact with nature, which also educates and humanizes man. He remembers how, at such a tender age, he fell into the “well-off water” that was in the paper mill; if his father doesn’t get him out, he drowns -he remembers with anguish-. That water went to the Albaida river from the paper mill. His father took him to the laundry that was nearby and the same women who lived in the factory all year round took care of washing him.

Shepherding is, without a doubt, one of the oldest trades. The man was a hunter, a farmer and soon he grazed the animals. Ramon Aviñó is the last shepherd in Castellón, and being the last in anything is charged with great symbolic and temporal significance, since part of our memories and longings go with him. Thanks to him and other shepherds from Castelló we can talk about this legendary and bucolic figure that children under fifteen in our town no longer know.

The year 1970 marks a before and after. Since that year, little by little, coinciding with the exodus of the herds, the shepherds themselves become extinct, but their exodus, on the other hand, has no return. The new generations do not see in this thousand-year-old, worthy and beautiful job, a reason that gives meaning to their lives. The day in summer used to start at six in the morning and end around ten, before the sun got too hot. Later, around six in the afternoon and until ten at night, they would go out again to graze the cattle. In winter, he left around ten in the morning, and returned around five in the afternoon. Cold and heat mark their working day.

He went out with the “ganao” (Ramón uses this word to refer to the herd) practically every day of the year except for Christmas Day. If the weather was bad because of the rains, the herd stayed in the barn.

Sitting in the canal of a ditch and in the shade of a large and old Salustiano, Ramon -while the herd was grazing- told me how one summer, returning from La Pobla along the Sesguera path, he was surprised by a strong storm of these that come from the west , and since the goats did not want to go forward but turned on their asses. The hailstorm caught them completely and it was an ordeal until they got home.

During the long hours of grazing, Ramón, our shepherd, entertains himself as best he can. There is a lot of time to think and each one is faithful to their own philosophy of life, the one that they have built after so many hours looking at the sky and the horizon. Some shepherds carried the typical reed flute with eight holes. With that simple and ancient instrument, beautiful and popular melodies were interpreted that put the artistic and tender note in those solitudes. If the hours became hard, it was, fundamentally, because food used to be scarce: a crust, dried figs, salty sardines, dry sausage, constituted their menu. A wine barrel and a gourd of water were essential items. If this was missing, it was necessary to look for natural sources or wells.

The usual equipment of the shepherd was formed by the crook made of almond tree, espadrille and woolen socks for winter, shirt, sweater, visor cap with earflaps, knife, hat for summer, and smokers, hip flask. And of course, the dog has never been missing from the team of a good shepherd. As Ramon told me one sunny morning when I was accompanying him along the path to Els Motxals: “The shepherd dog is very resistant to heat, cold and all atmospheric agents. He is a lively, intelligent and noble dog, always attentive to the shepherd and the flock”. If you did not have the company of another neighboring shepherd, the good habit of looking at the horizon, scrutinizing the distance, observing birds and their nests, the illusion of Sunday or meeting the bride at the dance was always at hand.

His father had 60 goats; He realizes that with this he could already live well. Milk could be sold to the townspeople and goats to the butchers. It recalls “the path of the dula” of Castellón, specifically the old path of Pobla Llarga. Formerly a man was in charge of taking out the little herd that could be in each house and took them out to graze along that road, in order to ensure milk in all the houses and families of the town.

He had 150 sheep and has never had the need for transhumance, something that other shepherds from other latitudes have done. He affirms that he could live well in Castellón, since the necessary conditions for grazing were given. The food of the herd kept in the corral mainly for the winter consisted of dried orange leaves, green beans, harvest and dried radishes. All this was the best and healthiest food possible for the herd.

It still has the barn, but it’s empty. Ramón hoped that his son would continue the tradition, but it has not been possible, because he only had one daughter and, as he says, “it was not a job for a woman.” Although today the life of a shepherd in our town would be very difficult, since he would have serious problems to carry out his work, the field is not the same. He already began to suffer from them at the end of “his life as a shepherd”, around the year 1992. Problems such as excessive car traffic without patience, excessive spraying of the terraces that harm the flock, misunderstanding by the very people who complained about the garbage or the smell…

He complains that the people who have herds today do not love the animals as he loved them, they do not have the care that the animals need, he says, and they do not take them out to graze. In Castellón there were about 23 shepherds, among them the following stand out: the Talens, Uncle Manuel de Sumacàrcer and Uncle Varela. They all sold milk on the streets. His father, with 10 or 12 goats, would sell milk at the factory; I was going over the bridge and there was no traffic, only the rich had cars. His brother Rogelio no longer had that hobby and dedicated himself to the land. His father used to say of his brother: “Açò és com el ferrer d’Ibi que ferrant, ferrant, perdrà l’ofici.”

His father hired children, at seven pesetas a day, to take the flock out to graze. The serious problems were the cattle’s own diseases such as “la hoof”, which killed them bringing ruin to the shepherd, or when sores developed in the animal’s mouth and they could not eat until they died, it was a very insecure job and currently There are no longer shepherds around us, neither Manuel, nor Cárcer, nor La Pobla…

Taking out the garbage is what he liked least. I went through the Fuente Amarga, the Fuente del Poll, by the Santa Anna baths, by the river. He says that at that time he was very strong. He has surprised people making asparagus, and even stealing oranges, he has been a spectator of the passing of everyday life. He says he suffered a lot, the complaints for entering the terraces of others, and the guards demanded a permit. In Castellón there were 12 guards who watched over the terminus and a guard chief who watched over them.

How far away that perfumed shepherd of pure field, and with the eternal kiss of the sun, from the stressed and thick citizen of our asphalt. As far as those times from now. That distance that has been forgotten is what we intend to save with this small tribute and these memories. Especially because the shepherd, like the bailiff, the mattress maker, the umbrella stand, the sharpener… all almost forgotten by us. Without them, and especially without the shepherd and his biblical image of the exodus, to which we pay homage today, the mountains, the ravines, the lonely roads, are no longer the same.