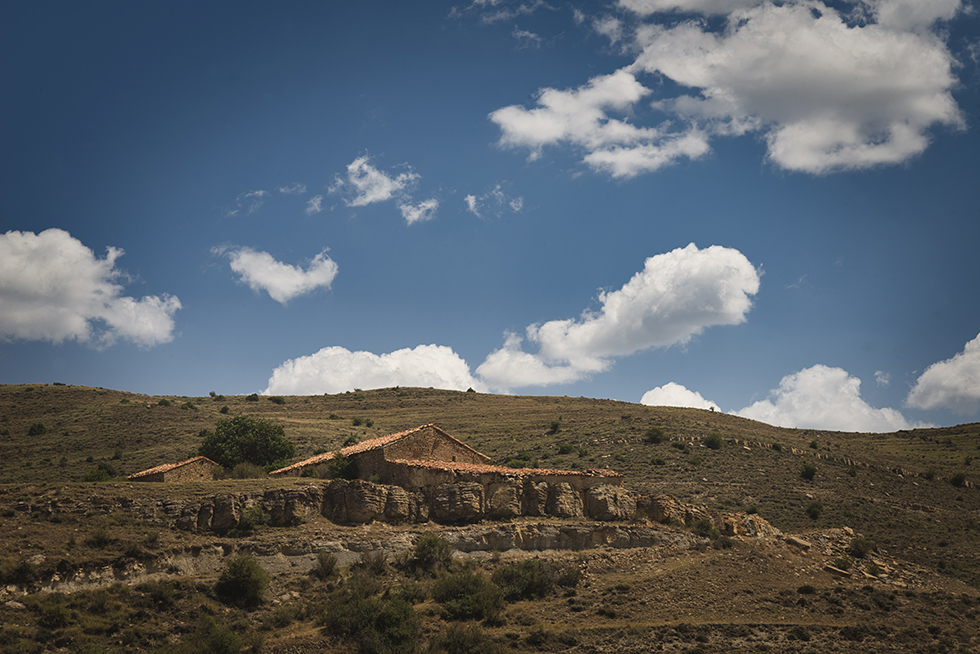 Villarroya de los Pinares is the first town coming from Teruel, it takes us into the Maestrazgo turolense, north to the Gúdar mountain range, next to the Guadalope river, at 1337 meters of altitude.

The Maestrazgo region, located to the east of the province of Teruel, includes fifteen towns in a vast and today uninhabited territory that is heir to a remarkable historical legacy and a rich architectural and cultural heritage. Its identity, forged through the passing of centuries, is of land in between Aragón, Valencia and Cataluña halfway through the Mediterranean, which has been a scenario of historical conflicts that have enriched its culture. The small towns of the Maestrazgo climb to a terrain of steep orography, where mountains and ravines alternate, rugged millstones and narrow meadows, mostly furrowed by the Guadalope River and its tributaries.

Crossing valleys and mountain ports we reach a high where in a livestock exploitation, cows peacefully graze, now near Fortanete.

This peaceful and welcoming mountain town, which was once a well-populated, industrious and prosperous town, currently has only two hundred residents dedicated mainly to agricultural and livestock work.

Its urban area is located at 1,353 meters of altitude, well oriented, looking for the light of noon and sheltered from the cold winds from the north.

During my journey to Cantavieja I stop in the Dehesa viewpoint, a spectacular valley because of its meadows, pine forests and cows that will accompany us all the way.

The population of La Iglesuela del Cid is set in a loam occupied by one of the best sights of architecture in dry stone of Aragón. This traditional architectural technique in which mortar is not used, constitutes a true Ethnographic Heritage protected as a Set of Cultural Interest. This place, which was already populated before the arrival of the Carthaginians, is named precisely after the Castilian knight Rodrigo Díaz de Vivar, who ordered the town to be fortified and the castle to be built.

We end the route in the town of Mosqueruela, which belongs to the Gúdar province, out of the Maestrazgo.