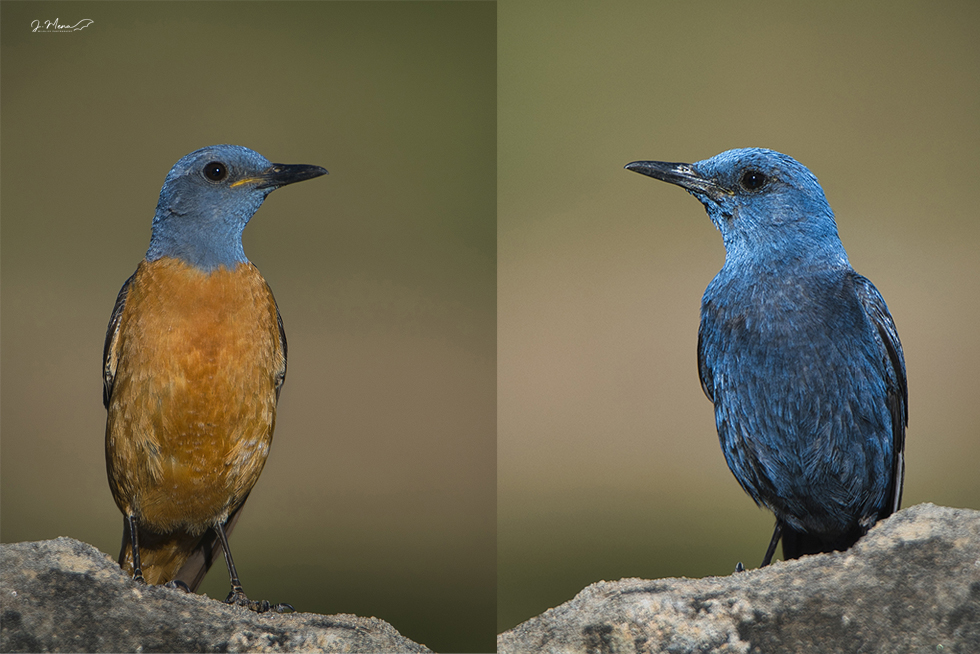 A few weeks ago I went to the region of Los Serranos in the interior of the province of Valencia, through the area of Aras de los Olmos and La Yesa, where we find mountains that exceed 1000 m. altitude and have an immense forest mass of pines and holm oaks that alternate with areas of fields of vines, cereals and almond trees. The Turía river crosses this region from north to south through places of great natural and scenic value. The climate in these places, which are very close to the province of Teruel, is continental, with cold winters and very mild summers.

Rock thrushes belong to the thrush family, a group where we also find redstarts, wheatears, stonechats and thrushes. They are insectivorous birds, which during migration also take advantage of wild fruits and berries. Of variable size, they have fine beaks, strong legs and varied plumage according to the groups, from the black of the blackbird and the black redstart to the color scheme of the rock thrush or the rock thrush. All emit songs with elaborate melodies that distinguish them from other families.

Rock Thrushes are birds similar in appearance to starlings, with thin and strong beaks, which feed mainly on insects and other invertebrates, but also on molluscs, small reptiles, amphibians and wild fruits. They emit melodious reedy songs. Their popular name is due to their preference for rocky areas where they are usually found upright, in dominant points. Both Rock Thrushes are mountain birds with the Rock Thrush being more likely to reach higher altitudes than the Rock Thrush.

Male Rock Thrush colors are very striking, with bluish-gray head and shoulders, rufous chest, belly, and tail; the females and the young specimens have more brown and discreet tones, except for the tail, similar to that of the males. It measures about 19 cm. of length. It breeds in rocky places. In the Valencian Community it is a rare and very elusive species.

In the migratory season it can be observed in other different environments. The Rock Thrush is a migratory bird that arrives in spring, leaving the territory at the end of August and the first weeks of September after the breeding season.

The male Blue Rock Thrush stands out mainly for showing a chromatic and unmistakable uniformity of dark blue color that in good lighting conditions presents some metallic shine, while the females have a much duller and more discreet plumage, dark brown on the upper part and with white spots on the belly presenting a more timid behavior.

Its size is 22 cm. in length, being somewhat larger than the rock thrush. The Rock Thrush, unlike its cousin the Red Rock, uses human constructions and even urban buildings to build its nests. It is a year-round resident with slight shifts in altitude.