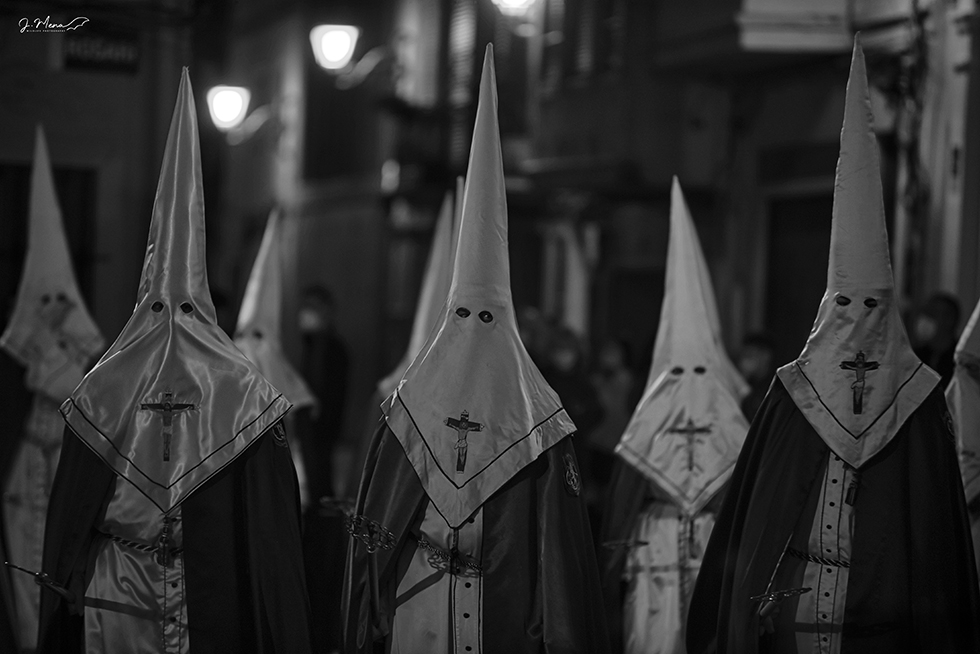 The conical shape of the hoods of the Nazarenes evokes an approach of the penitent to heaven, interpreted by many Christians as a place of salvation. This symbolic value is analogous to the one that the cypresses have, trees with a pointed crown, in Christian cemeteries, which bring the deceased closer to heaven, a place where, according to some beliefs, life after death takes place.

For American culture, the most representative thing of the Nazarenes is their hood, a kind of mask that reminds us of the ones used by the Ku Klux Klan, but the true origin of this clothing goes back to the times of the Spanish Inquisition.

The Nazarenes, also called penitents, are a very important element in Spain’s Holy Week (Semana Santa), where dressed in their hoods, the cape, the cassock, with badges, scapulars and other accessories such as candles or banners of their brotherhood, they accompany the different images carried on litters that process through the streets of our towns and cities, to the rhythm of slow, solemn music that envelops the viewer in a magical setting.

Some of them, because of a promise that they might have made, make the journey barefoot or dragging chains that are attached to their ankles.

We can’t forget that, inside the Semana Santa of any corner in Spain, differences are established in between the brotherhoods of the penitents Thus, we have the penitents with a cross, which are those who, as their name indicates, carry a penitential cross, the penitents with insignia, in charge of carrying the rods with the identifying insignia of their brotherhood, and lastly, the row penitents , who are the ones who carry out the processional route carrying a lighted candle.

THE PROCESSION OF THE HOLY BURIAL ON FRIDAY 15 APRIL