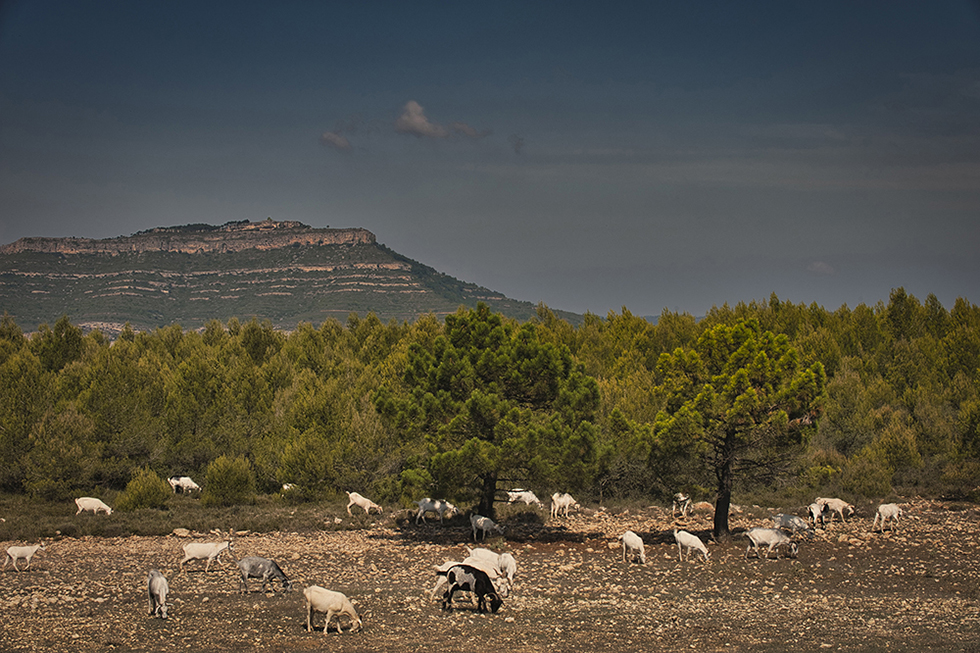 After several days of persistent rain, the sun illuminates the clean autumnal atmosphere; At the top of the mountains, through shaded areas and valleys, oaks, poplars and ash trees begin to turn yellow, where these groupings of trees now stand out in the Mediterranean landscape. The flock moves through the high peaks of the Sierra del Caroig. Not far away, in the depths of the forest, the croaking of the common toad can be heard. Along the path we see some lizard basking in the autumn sun. Vicente Talens, who is with us this day, stops to cut some branches of pebrella, a plant endemic to the Valencian mountains, widely used in our Mediterranean cuisine to cook gazpachos and to marinate olives.

Dawn in the mountains of Caroig with rain and persistent fog. The herd moves along the path that goes from the source of La Jaraca to the area of ​​the Matalo ravine, La Juanera and El Púlpito, at the foot of the Caroig peak. In some sections, the path crosses rows of Valencian oak and mountain ash, which give a different color note in the austere landscape of the Mediterranean forest, where time seems to have stopped due to the calm that reigns in the environment.

We pass by some abandoned barns, which with the fog seem to be even sadder. We leave the path and head down the slope, among Kermes oaks, rockroses, gorse and other bushes. In the middle of the forest we found a yellow mushroom, it is the goat mushroom, says JV, and they are beginning to be seen now at the beginning of autumn, and they are an indicator that in 15 or 20 days the pearms will begin to appear.

Having lunch at Fuentefría JV tells us what happened to Paco, an uncle of his who, as a young man, while taking care of a flock, fell asleep on the threshing floor near a country house, and the sheep left him. When a reaper arrived next to the owner of the sheep and seeing how he was sleeping, they decided to play a prank on him, shouting: “Pacooooo, runeeeeee, the fox!!!!, the frightened boy ran after the sheep.

Deep in the forest we hear the lugubrious hoot of the tawny owl, which despite being a nocturnal bird, on gray and foggy days like today, remains active. In the forests around the Caroig peak, the presence of these enigmatic and mysterious nocturnal birds is very frequent, says JV.