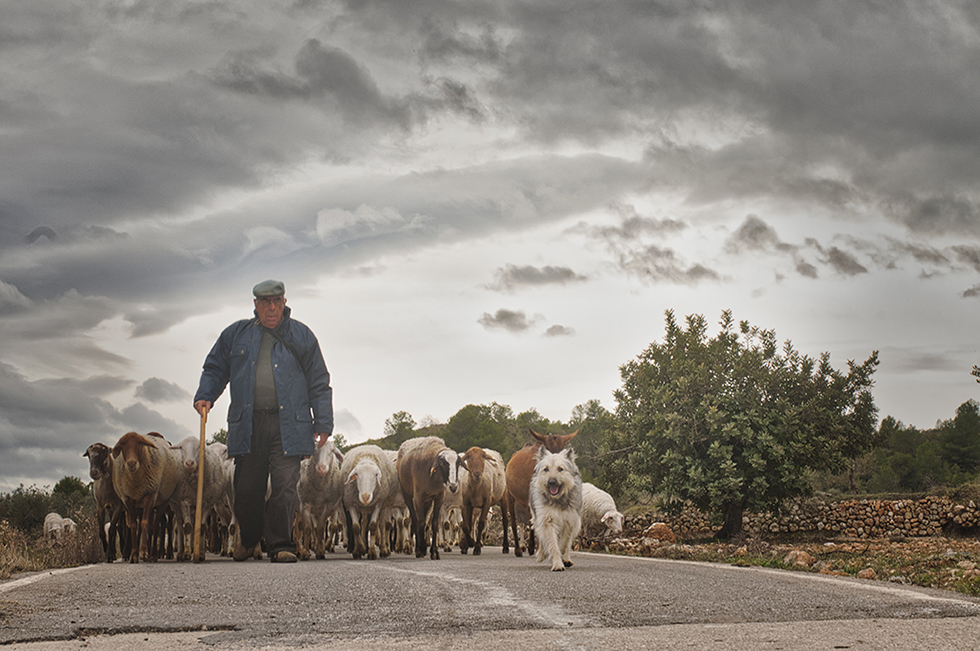 One cold and icy afternoon in January, we returned to one of the two pens that the shepherd has in the mountains. This time we go to the one near the path that leads to the Fuente del Pino. The corral is located at the Pie-de-Monte of the sierra, in a dry land area full of terraces of olive and carob trees. At its side: abundant water, air, the sound of sheep shearing, a grouping of sheep and their bleating. Nothing escapes this unique picture, a priori it might seem simple, but if one stops, it is loaded with historical meaning. As early as 570 B.C. The famous image of the Moscóforo is known, from archaic Greek art built on Mount Hymettos: it is a character carrying a calf on his shoulders and symbolizing the image of the Good Shepherd who watches over and guards his flock at all times.

After leaving the pastures near the town, we first enter a “branch” that takes us directly to the dry land. We cross a long stretch that crosses a ravine to shorten the path, and climbing a few meters up a small slope we reach, at night, the barn. In the background in the forest you can hear the owl or caro as they say here in Navarrés. Ramón knows some stories about this mysterious nocturnal bird. Later, in the heat of the fire, he tells me: “In my grandparents’ time there was a shepherd named Caro, he invited the Lord (God) to a dinner one day, and instead of putting a kid on his plate, the shepherd put a cat When he got ready to eat, the Lord said: “If you are a kid, be still, and if you are a kitten, swing the saucer” and a cat came out meowing (Ramón laughs). And then the Lord told him: “You are expensive and you will be expensive, but you will no longer find your goats” and they say that they are the wild ones, those that go around you are barriás (lost) and he (the shepherd) is that bird, the Expensive.

And there was another shepherd from Ayora who was nicknamed “Paticas de Acero”, small but that man ran like a devil. One night while being “majà1” with his herd of white goats, a carob from the top of a pine tree began to ululate (Ramón begins to imitate his song), and the meek ones of stone began to go straight towards where the bird was, thinking that it was the shepherd who shouted at them, also dragging the entire flock there, once the goats were under the pine, the bird flew to another pine further away, taking the flock of the “majà”, not leaving them alone all night ” .

1 The “majá” is a local expression that means “to spend the night in the open with the sheep”.

IN THE HARD WINTERS…” and I with the horse dragging pine branches to the door of the corral because it was all snowy, all covered with snow, and the next day with the club and a stick I shoveled the snow onto the pilgrims so that they would stay uncovered and they (the sheep) took four bites, We have not suffered anything in this life! Not now, now if you want, even if it is snowy and the sheep cannot get out, you call by phone and you have all the feed you want in the door: I think, alfalfa, oranges, everything, but not before, before there was neither money nor facilities, only what the land provided, picking branches from the olive trees, because down here there were orange trees (referring to the orchard in Navarrés ), but up there (in the Caroig mountains), no…and we carried the ramucha, we made clothes and hung them on the stable. The olive branch is very good, better than the orange branch, it has more food…”.

March 2009
We pass near the Castle of Navarrés1, it is a sunny spring morning. You want to look for the first rays of the sun after the harsh winter. While the sheep graze on a lost terrace, the shepherd takes the opportunity to pick asparagus, at this time is when they are most tender. We stop in the shade of a large old olive tree. Few people are capable of coexisting harmoniously with nature as Ramón shows us and those people who travel rural trails daily. No one like them is capable of listening carefully to the heartbeat of a mother earth who has always given the best for her sons, men.

He tells me about the “basquilla”, a disease that demanded the constant attention of the shepherd and that the sheep catch when spring arrives and begin to eat too much of the first fresh grasses with the first heats. The remedy for this (many died) was to go to the mountains and put them on a diet, making them only eat the toughest grass on the mountain and in small quantities.

1 Located on a small rocky spur that dominates the Júcar riverbed and whose height is 380 m., called Peña del Fraile. It is a Muslim construction that later, in the Reconquest, was used by the feudal lords.

Night falls after a hard day of grazing, the sheep retire to the corral to rest, as they have been led to fresh pastures. Nearby, on an old wall, the little owl (Athene noctua) returns to its perch after having fed its chicks in the old trunk of a century-old carob tree, where it has its nest. Ramón also needs his rest, but he still has to feed a few hens that are crowded in the barn. He raises them as it has always been done: panizo and barley. It seems that in his vital circle nothing has changed. No chemical foods, he knows what he eats and does it to taste: today people eat very badly, he says. Suddenly he is seen with a couple of eggs in his hands and says that today he will have a good omelette with asparagus that he has picked in the field for dinner.