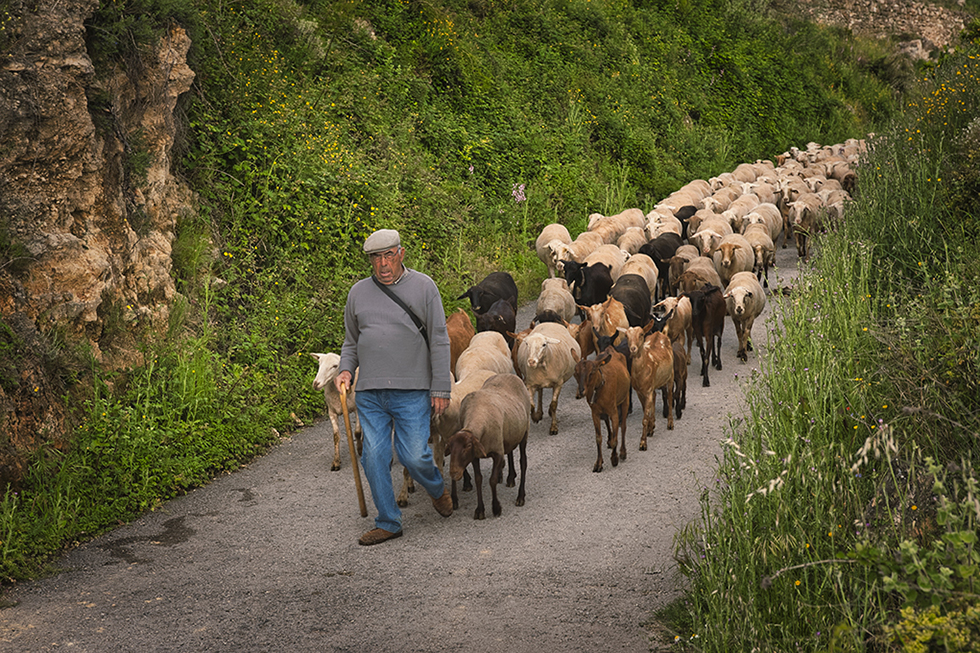 May 2009
At the end of May we accompany Ramón, our shepherd from Navarrés, through the abandoned fields that border the clearings in the forest. It is already spring and the swallows are celebrating wildly from one side of the sky to the other, knowing that the passage of the cattle will provide them with food: the insects that hide among the stones and are now exposed. Nearby, in a small grove on the mountain, we once again hear the harmonious song of the cuckoo (Cuculus canorus), which seems to warn us of its presence and control of the place.

These are dates when the countryside is full of colors and life: chamomile edge or bitter (Santolina chamaecyparissus). Ramón, in addition to his knowledge of nature, surprises us with his knowledge of botany. Ensures that these herbs are very good for blood circulation. Meanwhile, we continue talking and accompanying the cattle through the pastures, we step on the fields of old olive trees full of Everlasting de monte (Helichrysum stoechas). The view is impressive: the ground appears at our feet with an intense yellow, the closest thing to the sun. I start to sneeze and Ramón tells me that it also happens to sheep and it is due to some yellow flowers (Andryala intergrifolia L.), which now abound in the fields along the road. Other flowers that we observe, in this peculiar trip to the bottom of the flora, are the Herbs of San Juan (Hypericum perforatum1). As you can guess, the spectacle that nature offers us is exceptional, and, without realizing it, the stress disappears. Calmness and peace return to us, as a sweet guest of the soul. Without a doubt, as one travels through the fields and accompanies the shepherd on his itinerary, one acquires exactly the same experience that Fray Luís de León narrates in his prose entitled La Vida Pastoril:
“Pastoral life is a calm life away from noise and cities and their vices and delights. (…) They have their delights, and all the greater when they are born from simpler, purer and more natural things; of the sight of the free sky, of the purity of the air, of the figure of the field, of the greenness of the herbs, and of the beauty of the roses and flowers. The birds with their song and the waters with their freshness delight and serve him; And so for this reason it is a very natural and very ancient dwelling among men…2”

Around 12 o’clock in the morning the sheep stop in the shade of some pine trees to “sestero”, we take the opportunity to rest, eat a little and for me it is the moment when I have a relaxed conversation with Ramón. At our feet, immense terraces of olive trees, is the dry land landscape par excellence of these lands dominated by the Caroig peak. As Paco Tortosa said in his book “Rural Architecture of the Caroig Massif”, many of the olive trees from which we take their oil were already standing when Jaime I’s troops arrived, and they have been silent witnesses, with their fallen branches and twisted trunks, anchored in the terraces or next to the old paths, from the passage of the transhumant herds towards Alta Castilla. Thus, apart from the immense mountains of the Massif, this is the most characteristic landscape through which the shepherds of Caroig move.

1 The name Hypericum derives from the Greek hyperikon (“above images” or “above an appearance”). For some, the name refers to the property that was attributed to it to make evil spirits and apparitions flee; Flowers of this plant used to be hung over religious images on Saint John’s Day; for others, the glands of its petals seem to form images (this fact was given great importance in the Middle Ages, since it was used in exorcisms for its cabalistic virtues). The term perforatum is due to the oil glands located in its leaves and sepals that give the plant a perforated appearance when viewed against the light.
2 Del Mar, E. FR. Luis de Leon “Pastoral Life”. Models of prose literature, excerpts from the most famous Spanish writers from the fifteenth century to the present. John Chapman House, 121 Newgate Street, London, 1854, pp. 77-78.

Ramón tells me that a few years ago when summer came they did the “majá”: they took the sheep out of the pen around 7 or 8 in the afternoon, when the sun was not so strong and the breeze timidly tried to gain presence, from that time and up to approx. at 12 at night the sheep grazed, and from that time until 4 in the morning they gathered to rest. The shepherds always sought the heights of the mountains, since the sheep have a tendency to go uphill, in this way they ensured that during those hours of rest in the “majá” the sheep did not go down, they remained on the slopes of the mountain grazing and they could remain a long space in solitude: “We were going to look for the highest mountains. The cattle do not go downhill at night and you have to look for the high ones”. The shepherds cut rosemary bushes, cleared them and made a kind of bed, covered themselves with a blanket and slept for 3 or 4 hours. His father and the shepherds of that time rubbed garlic on the stones around where they had to sleep in order to protect themselves from vipers, scorpions, spiders and sadetons. From 4 in the morning the herd moved until 10 approx. where they went back to lock themselves in the corral and protect them from the strong sun.
In summer if the grass was very dry the sheep did not want to eat it, the shepherds resorted to salt letting the animals lick it, in this way they drank a lot of water and got stuffed, so the next day when they went out to graze they were so hungry that they they ate all the weeds no matter how dry they were. Ramón, while he tells us everything related to the cattle in the strong days of July and August, recites another poem that he learned in the mountains and that was recited once the summer period ended, and therefore, they abandoned the “majá”: