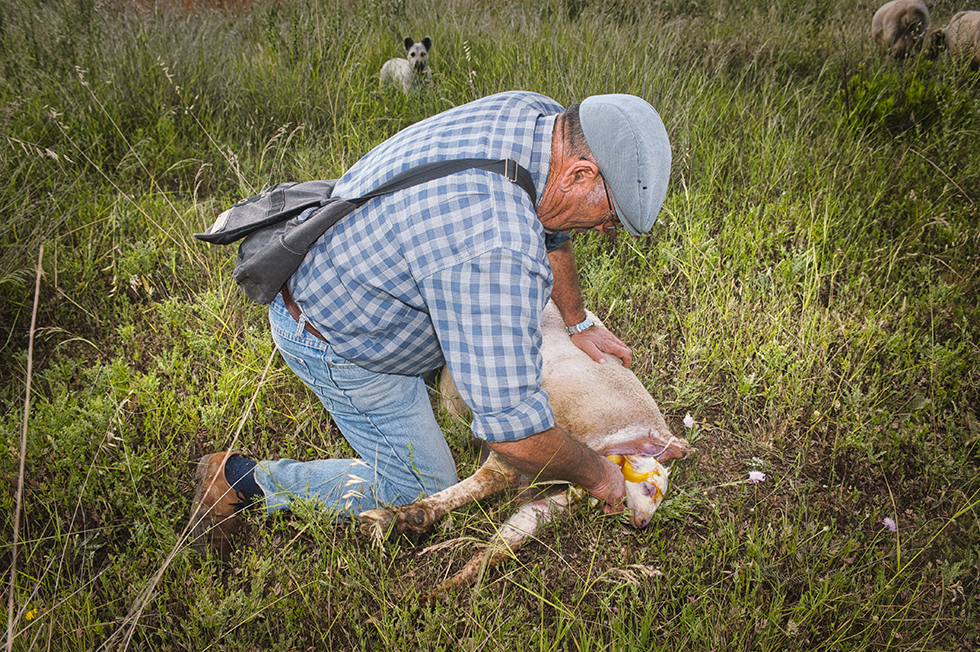 May 2009
Sierra de Navarrés, reservoir road of Escalona and Tous. Sunny morning, the herd quietly grazes in an abandoned orchard. Suddenly, a sheep goes into labor. Days ago the shepherd had already warned him: “Tomorrow there is a change of the moon and it is easy for the sheep to start giving birth.” So it happens, one of them does and gives birth to two lambs.

In the shade of a large cherry tree, we are about to have a welcome lunch, the mountain whets our appetite. Ramón tells me what happened to a shepherd while he was a “majá” in the Sierra de Bicorp in the Juanera area: “the man came at night to drink from a fountain and was bitten by a sadetón1, his sons tore his affected area so that the poison would not pass into the blood and they loaded it onto a cavalry pulled by a mule and took it to Ayora to see a doctor”. (Note: here we have to talk a little about the Sadeton and the serps: Ramón perfectly distinguishes the type of snakes that snake through the mountains and their dangerousness, since in this is the care of their sheep and their own: the sadetón is the snout viper, while the sacre is the ladder snake, while the green snake is the bastard snake).

1 Reptiles often come off easily in conversations with shepherds. They are not seen as much in the meadow, where they know how to hide from human presence and are rarely surprised. In fact, shepherds know more about them from the wound of a sheep than from direct vision of said vermin. Undoubtedly, what they say about these poisonous serpents has its real counterpart, but unless one moderately rationalizes their comments, one realizes that they are wrapped in a certain mythical clothing. It seems that they are stories that emanate from medieval beasts collected in some writings by people who heard them from their ancestors. The stories, over time, became epic and legendary, which made these animals huge and dangerous hairy monsters. They were impossible beasts that frightened the dreams of defenseless shepherds and farmers. Surely all this will have a scientific explanation, but listening to so many stories about them, one wonders, looking around uneasily and while feeling a slight shiver: Will there be any? Is it true all, or part, of what is said? Will he watch us to stalk us?
In Greek myths, the serpent is described in the form of a monster with dragon wings, and it is said that it entertained itself by ravaging the Greek region where Mount Parnassus stood, near Delphi, and that there it devoured men and animals, sowing terror with its fearsome presence. Other authors link the birth of the serpent with the flood that devastated the earth at the beginning of time. Because of the depraved customs of the human race, Zeus sent a flood to destroy men. Only two people survived: Deucalion and his wife, Pirra, who managed to save themselves for having led a straight life and in accordance with the mandates of the gods. Already in the Old Testament, specifically in the book of Genesis, the serpent is the instigator of man, and, in the New Testament book of Revelation, it represents the beast that tries to devour the Savior of the world with its jaws.

Likewise, the classical authors came to feed the myth, so that an authentic legend has been taking shape among the inhabitants of the countryside. In the first century, Pliny the Elder, a Roman writer, scientist and soldier, tells us about the iaculum. He shows it as an animal that crosses the branches of trees, to which he attributes flying ability: “The iaculus is thrown from the branches of a tree, so that it is not only dangerous on land, but also flies through the air like the projectile of a catapult” (Pliny the Elder. Natural History, book VIII, 35.).
In the same way, Saint Isidore of Seville, in the seventh century and in his Etymologies, where he comes to define what history is, makes a brief but interesting comment about this flying serpent: “The yaculo is a flying serpent. They jump from the trees and throw themselves on the animals that pass by, to which it owes its name, loopholes (Iaculi)”. (Isidore, St. Etymologies. Book XII, 4: 29.). And from there, comes the name of Sadetón, which the shepherds of Caroig name so much.
From this perspective, and knowing that not everything is legend -because these fragments will be given by the observation of different naturalists-, it is not difficult to understand how all this type of belief in monsters capable of attacking cattle and even to the man.

In a grove very close we hear the song of the cuckoo and Ramón, suddenly and cutting part of the sausage, accompanied by a crust of bread and while he shrinks from the sip of peleón wine that he carries in a small boot, he recites some popular verses to us about such a singular bird. The curiosity of this bird is that it lays its eggs in another’s nest, so that another species of bird will raise its fledglings without knowing it. In addition, the cuckoo’s fledglings are larger than the rest, so the other offspring will either be thrown to the ground and condemned to death, or they will starve because they cannot compete with these predatory offspring:
“Cuco, pájaro que nunca anida,
pone un huevo en nido ajeno
y otro pájaro lo cría”.

Then he stops talking about the vermin of the field and returns with a saying that is addressed to the shepherds. He speaks of them as men who wander without warmth from home, who by day go through the fields and at night in the corrals. Their work requires constant attention, whether it is for the pasture and good provisioning of the cattle or for the care of any disease or animal breeding. He affirms that there are many who contemptuously address them with these rhymes, because according to many their work separates them from social relationships and they become strangers to ordinary people, as the verse says in brutes and animals:

This saying is not to his liking, because he does not consider it fair and appropriate to the reality that shepherds live. It is true that their work demands an enormous sacrifice, but it is no less true that it enables them to perceive details that others are unable to see, and instantly reformulates the verse by changing the stanzas. It is a beautiful verse full of symbolism, since it is known that, when the child God was born in the cave of Bethlehem, it was the shepherds, the humblest on the face of the Earth, who were the first to receive the news and to adore him: