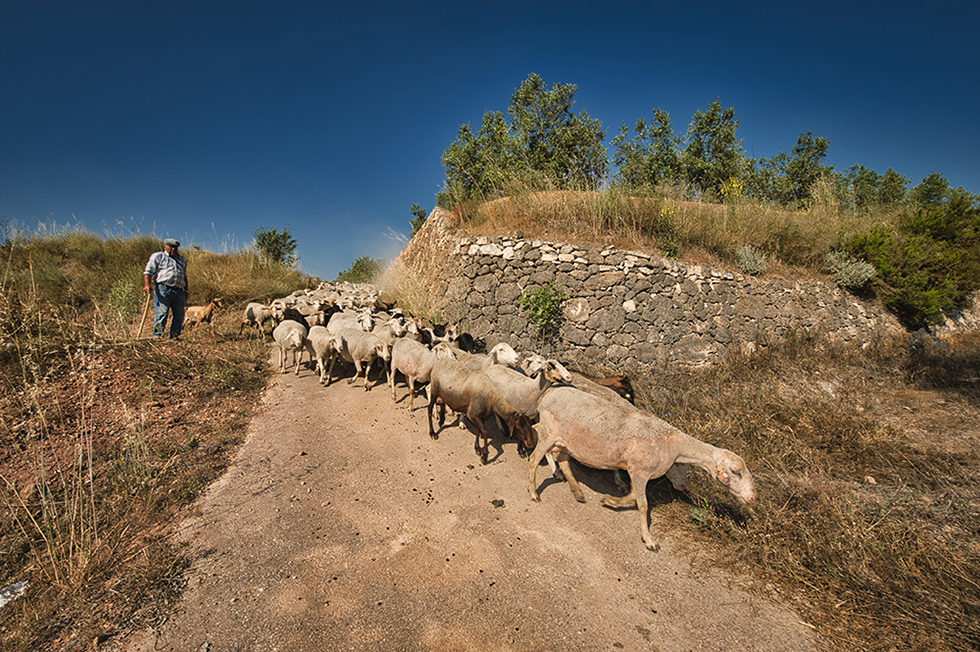 June 2009
Dawn in the mountains, the rooster sings. The herd prepares for the suffocating heat of summer. Ramón arrives at the corral and before taking out the impatient sheep, hangs the bag and the crook on the stake of the entrance door. He prepares to carry out his daily liturgy, which consists of separating the lambs born days before from their mothers, since they are too small even to go out into the bush, some of them even breastfeed them with a bottle because they are rejected by their mothers.

Then he prepares the rest of the herd for the hard day in the fields of horseshoes and suffocating sun. Finally, the shepherd opens the door and the sheep stampede out. It’s 7 a.m. A few hours of strong heat await us until 11 o’clock, which will be the time when we will return to the corral. Today Ramón has decided to go down to the garden. We take the path that descends from the Eras departure, and running parallel to the Cooperative, we cross the main road Sumacárcer-Navarrés 1km below and along a path we reach some abandoned fields adjoining the vegetable and fruit tree terraces that are to the Pie-de-Monte. Ramón leads the herd along a path that leads to some abandoned orchards: “they will spend some time here, so we are going to have lunch” –Says Ramón confidently. We sat in the shade of a huge medlar tree, laden with fruit. “More and more land is being abandoned because of how poorly paid the farmers are, men who take care of their crops carefully for a time so that unscrupulous intermediaries take the best part of the cake. “The sheep is raised behind the fence” -he says-, as the plow passes, the grass that comes out is better, has more sap and is newer. The grass of the old and abandoned fields is more “ruin”, that is why it is so important that the land be cultivated, working it we all benefit, shepherds and farmers. Why are so many sheep raised in La Mancha? Because the land is worked a lot: stubble fields, fallow land…not here, on the other hand”.

He tells me about the “manso de piedra”: “it is about a male goat that was castrated when it was little. They tied a 15 or 20m rope to his horns, so they left it loose, then they began to call him a name, “Colonel”, “Captain”, at the same time they were throwing stones at him and pulling the rope until he got to where the shepherd was. He gave him a piece of bread as a prize. Later, when she was already taught, they released her from the rope. The meek ones made of stone are in charge of guiding the cattle and they carry a pickaxe (larger than normal shearing). The whole herd moves to the noise of the pecks, so if a goat or sheep is lost, it raises its head and hearing the peck comes.”

There are many surprises that you accumulate by spending so many hours in the field accompanying the shepherds. A few meters from us, a huge bastard snake slides through the wasteland in search of some bushes near the edge of the road where it can hide. I can perfectly observe the intense green reflected by the strong sun and its huge head, it is the largest snake in the Iberian Peninsula, some specimens exceed 2m in length. I prepare my camera, at the same time Ramón reaches for his club, evidently the shepherd’s objective does not coincide with mine. The bug disappears in the thicket… “some shepherds hunted these snakes to make their stews, I only collect the skins that these reptiles leave in the mountains when they molt because they are very good for the cold of dogs and cavalry (horses, donkeys …)”.

June 2009
Seven in the morning. Very hot since we left the corral. We pass a watering hole and the sheep quench their thirst. The sun and high temperatures mark the working day. In the central hours of the day all activity in nature ceases, birds and mammals remain in the shade of trees and burrows waiting for the heat to end. I discover the nest of a hoopoe in the old trunk of a carob tree…

During these long hot days it is common for the flock to stop a lot to rest in the shade of large trees, moments that I always take advantage of to talk with the shepherd. Today he describes to me some herbs from the mountain such as “wolf’s ear” that, “we used to make light, we wet its hairy leaf with oil, first the entire vein so that it would catch fire better. This herb is eaten by goats, not by sheep”, and Ajocasapos “very used to make “ramassos1” and to remove inflammations and bruises by applying a hot cloth infused with this herb to the affected area”.

1 Type of broom to remove the straw from the rice or wheat in the beds.

Afternoon in mid-August, quite hot. We entered a field full of “horsetail”, grass that according to the shepherd is very good for all kinds of cattle and cavalry, “I use it a lot, it is very diuretic in infusion”. On the edge of the road there are some brambles full of blackberries.

While we eat some, he tells me how much it needs to rain so that the fields begin to turn green. We arrive at a field of watermelons, all spoiled, the owner, the president of the Navarrés Cooperative tells us the problem is that the watermelons have not been sold, they were worth nothing in the market…