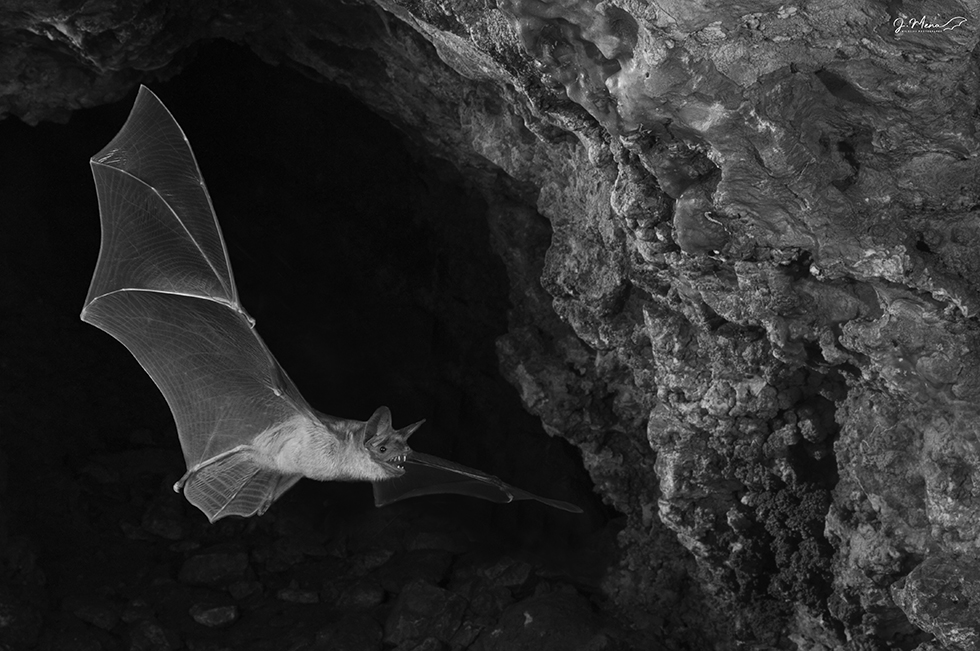 In Jules Renard’s natural histories I read that

…there is no corner where a piece of night doesn’t penetrate…shreds come off of it, intertwined at random. This is how bats are born. And to this origin they owe the fact that they cannot withstand the light of day… but, no, they are not bad. They never touch us and “armed” with my cameras I went down to one of their “houses” to photograph them.

The Chiropteran photographic project in the Valencian Community has been underway for some time with the intention of photographing and classifying these mammals in their natural state and in their various species. As is known, it is a nocturnal mammal closely linked to Valencian culture and the coat of arms of its city, as it is said that a sign of the Reconquest of the city by Jaume I would be the agitated flight of these mammals. In addition, it is an animal linked to literature and cinema, since the Irish novelist Bram Stoker (1847-1912) used it as a symbol of vampirism in the book that bears the well-known title of Dracula (1897), in which the vampire turns into a bat at will when he wants to go unnoticed or simply fly away to another place. From then on, this curious little bat would be associated with fear and terror, being as it is, the only mammal capable of flying and that has adapted to different ecological niches throughout the world.

Not in vain, the bat performs extraordinary pest control, as they are huge consumers of insects that avoid the use of pesticides and chemical pesticides that have negative effects on the natural environment. In the Valencian Community I have been able to photograph a good number of them in their natural space. It is not an easy or simple task, since night photography and the cavities that must be penetrated for this photographic design are arduous, expensive, and require a large deployment of technical material, where we have little room for improvisation, that is to say everything must be prepared in advance. In nature, this requires creating an appropriate scenario, knowing the possible trajectory of the animal, and then performing multiple tests.

The work of awareness and protection of the bat begins at the moment in which this work and the current reality of this small flying mammal are explained and shown to the public.

Let’s not forget that many species of bats spread all over the globe are in a very critical situation. The International Union for Conservation of Nature (IUCN) Red List identifies more than 200 species as endangered, vulnerable, or “near threatened.” The current serious ecological crisis also affects this species, since the indiscriminate felling and burning of forests, together with water pollution and excess pesticides, are greatly reducing the population of these animals.

The fact that it is a tremendously silent and nocturnal animal, together with a mythology associated with horror movies, seems to work against it, since it goes unnoticed or despised. What is intended in this project is to record its current reality and the need to conserve bats in a place like Valencia, where it is a symbolic reference. There is no Valencian who does not recognize it among its cultural heritage. But we do not stop there, because this project is ambitious and wants to be extended to the entire national geography.