The common or mediterranean chameleon 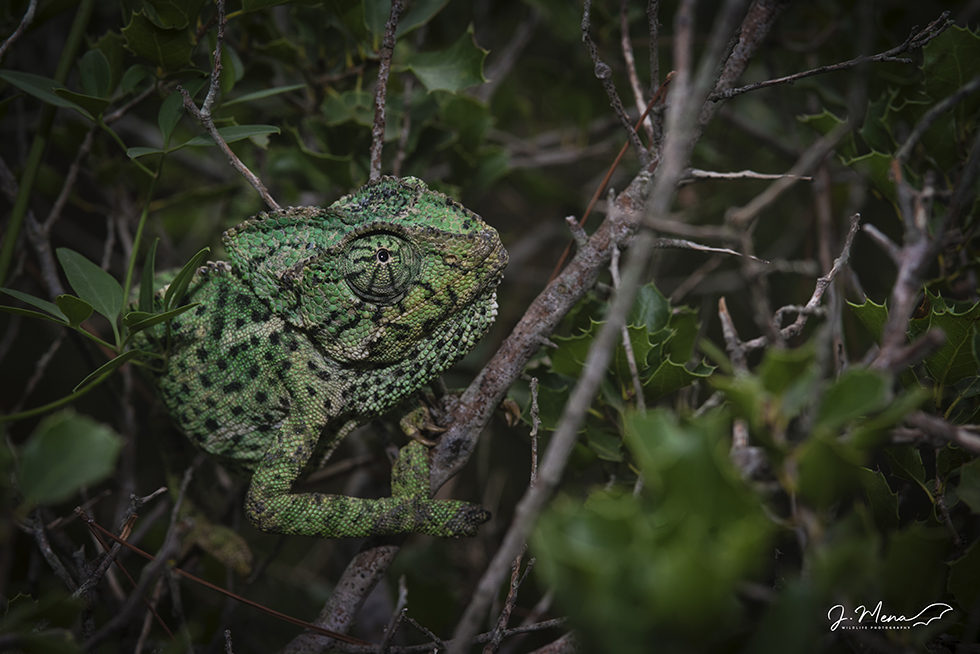 The common or mediterranean chameleon

A great percentage of the population except the Andalusian are unaware that there are chameleons in the Iberian Peninsula.

There are 202 different species in the world, the great majority of them being discovered during the last 20 years. They live in Africa, the Arabian Peninsula, India, Madagascar and Ceilan. They have the ability of changing colour at will and catching their prey, exclusively insects, shooting with great precision their long and sticky tongue at an astonishing speed, to swallow them next in an instant.

The common or Mediterranean chameleon Chamaeleo chamaeleon lives in the Iberian Peninsula, who is distributed across the north of Africa, the Portuguese Algarve, Andalusia, Murcia, Alicante, Malta, Creta, some Greek isles, south of Anatolia, Middle East, Sicily and Apuleius (Italy).

Recently there has been a discovery of a population in ‘la Sierra de la Falaguera’, placed in between the regions of ‘la Ribera Alta’ and ‘l’Horta sud’, making this place the northernmost spot where we can find this species. The study has been realised by Josep Bisbal and compiled in his final work in ‘Nueva población reproductora de camaleón común, ‘Chamaeleo chamaeleon’, in Serra de la Falaguera (Sistema Ibérico meridional, Valencia): recent introduction and colonisation of new spaces, published at the bulletin of the ‘Asociación Herpentológica Española.’’

It unfolds in olive and orange groves, in pines and cypresses, but also hidden between the mediterranean bushes like the lentiscos, carrascas, romeros…

The chameleon is a solitary animal, very territorial and extremely aggressive and intolerant with other chameleons, except during their mating season. The way they hunt includes patience and slowness in their moves, approaching relentlessly to their prey, until they find the opportunity to strike. Before they knew it, a viscous thunder would have erased the unfortunate insect from existence. Similar to other chameleons, the common chameleon changes colour, not just to camouflage himself with his surroundings but to express his emotions, his rank, sex and reproductive state. That means, it does not only consist in hiding, it also takes part in a complex system of visual signals that provide information.

Once they reach the mating season, the female places from 4 to 40 eggs, seven or eight weeks later, in a hole made on the ground, next to the bushes where they live.

This past weekend I was in these mountains, where I was able to witness a couple of chameleons with the help of the advice of some good friends who live near this place. This is the period where mating occurs and they are especially sensitive, so I tried to annoy them the slightest.

I hope that these images serve to help raise awareness about this reptile, a true treasure, that now, us Valencians have the luck to have it in our territory.