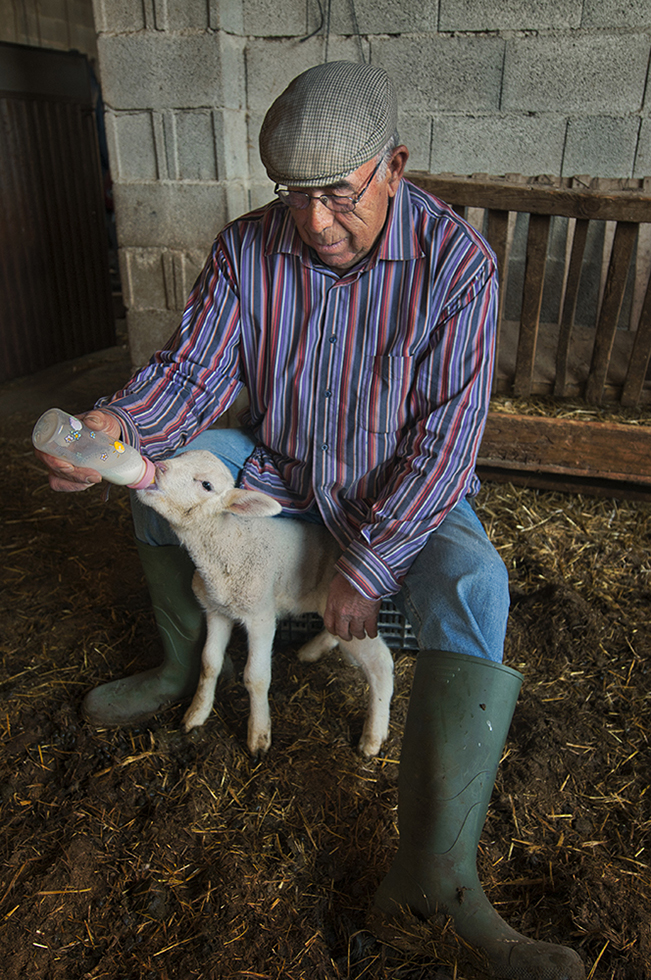 One cold afternoon in January, Ramón’s herd grazes peacefully on top of a mountain range, in the herd there is a dying sheep, Ramón tells me that about 3 days ago he was stung by a sheepdog. In the afternoon he decides to leave her in the corral, because he saw her in very bad condition. Vipers are one of the dangers that a shepherd can encounter. This snake usually bites in the neck. The shepherd, with a sharp branch of blackthorn that he always carries in his bag, cleverly makes a hole in the sheep’s skin to extract as much poison as possible, and then inject penicillin. This time, the sheep can tell: “it will be saved”. The shepherd Vte Talens who accompanies us this day says that he makes the sharpened branch with garbuller i petorret because according to him he says that “although it is not as hard as blackthorn, it is a type of firewood that does not infect the wound”.

We spent the afternoon near a fountain, in the shade of a huge pine tree. Ramón appears as a calm man, appraised by the passage of time and the thousand problems solved with patience. You can see his affection for his animals and, specifically, for his sheep, which he takes care of carefully. He says that when he went transhumance he took care of them like the apple of his eye, because he stopped to rest with them, even if it meant losing the march of the road and adding more hours to the march. Other shepherds, on the other hand, as long as they arrived as soon as possible and had the necessary comforts in stock, made their way without stopping, with the consequent suffering and exhaustion of the cattle.

Ramón reviews with me all kinds of wanderings and misadventures (like an adventurous Quixote), the path leads to confidence, because if there is something left over it is time and if something is missing it is haste.

Now an event comes to mind: “one day I had a very bad time, there was a lot of fog, impossible to see anything, and I got lost in the middle of a storm, even with the flashlight I couldn’t see “not a foot of land”, In the end I was lucky enough to find a farmhouse, La Umbría Negra, which by that time (1970) was already abandoned. This house adjoined La Matea de Enguera. Luckily, I was able to put all the sheep in the pen and spend the night, soaking wet and freezing to death…”. Ramón was lucky this time, because the door that led to the corral was closed but, thanks to a rope that he was able to cleverly untie, he entered with his cattle. Later he was able to take shelter in the Segurana house, equipped with many pens and thus, little by little, he was able to circumvent the harsh weather and approach safe places. You have to think that the vision of the cattle is essential at all times, and in these cases the loss of a piece can represent serious losses.

Ramón also bartered in the fifties. It must be said that the cambalache is closely related to pastoral life, since the same paths were used, and even the same exits to carry it out. He remembers with me what the fifties were, without a doubt they were difficult years and he tells me that now there is talk of a crisis, when everyone lives, dresses, eats and goes on vacation in a luxurious car. They went down, he and his father, to the town of Cárcer and climbed 200 kg. of rice, all on horseback, in exchange for 100 kg. of dried figs that they brought from the mountains. With these 200 kg. of rice were back in business: 100 kg. for a year of own consumption and the other 100 kg. They were exchanged in Ayora for 200 kg. wheat. There was no money and it was necessary to sharpen the ingenuity. On another occasion they lowered rebollones, between 80 and 100 kg., and also changed them for rice. If necessary, alternative routes were sought, since the Civil Guard was on the roads to prevent black marketeering or illegal trade. If the benemerita caught them, she requisitioned what they were carrying (oil, corn, flour…) and gave them a hefty fine. Even so, people took risks and traveled at night, the need was great. It could take a whole night to go from Alpera to Navarrés. Those were times when the Civil Guard had a lot of authority. From time to time they would show up at Ramón’s house for dinner and his mother would cook them the best they had. Afterwards they stayed to sleep and Ramón and his brother, without question, slept in the barn.

Coca de dacsa was the main food in those days. The corn was ground and replaced wheat, which was a luxury. It was a harder dough, but there was nothing else to eat. Ramón affirms that, if necessary, he would eat it again without complexes. Another important source of provisions was the slaughter of pigs. Everything is used from the pig: the meat was fried and put into a jar covered with the same used oil, so that it was perfectly preserved. The “butifarras” were put in a cauldron to boil and then hung on the chimney, to be used later. Ramón affirms that today that meat would go to waste, since it no longer has the quality of yesteryear, since the feed and the material that the animals eat are worth nothing.

We perceive in Ramón a penetrating and sure look, sometimes longing and downcast, but at all times a great love for his work shines through, which has ultimately been his life. He went down for many years to the roads of Almansa looking for food for his sheepfold: his face full of furrows, a reflection of a thousand roads traveled; his crook sometimes supports his tired and time-worn body. His dog, a faithful friend who has listened to and lived, along with his owner, a thousand stories; and, in the distance, you can make out the silhouette of the silent friend guiding his flock and who holds, in his white temples, a well of inscrutable wisdom. As a ceiling, a starry sky that contemplates his last adventures and pays homage to him with the brilliant light of its stars.