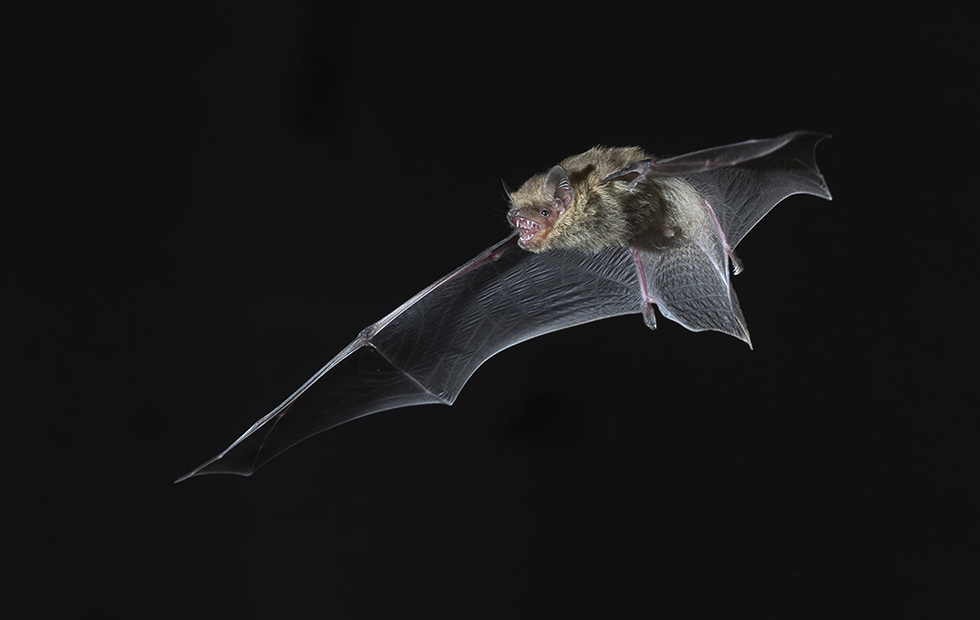 It is curious to find out that one of the most representative and significant symbols of our territory, is at the time the most unknown by the Valencians. We are talking about the bat known in our town as the rat penà, which is the most widespread and popular name in the Valencian Community. The adjective “penada” comes from the Latin penatus, -a, -um, and means that it has wings.
In the 2014 Festes Majors book I already talked about this mammal, the only representative of this order that is capable of flight, and that has wings made up of a skin membrane supported by extraordinarily long fingers. It lives in caves, in the cracks of houses and on cliffs, and comes out at twilight to hunt the insects it feeds on. On that occasion I focused above all on the myths and superstitions that surround this species.
If the bat is the symbol of the Valencian identity, we Valencians do not have a single identity but up to 33 different ones, as many as bat species exist in the Valencian Community. However, and although the experts do not agree, the bat that crowns the Senyera, later transferred to the shields of Levante UE and Valencia CF, has all the appearance of being a long-tailed bat -one of the most common to the Valencian territory – or, as some experts in heraldry maintain, it would not only be a chiropteran, despite tradition, but a dragon that has fallen into disrepair and represented with the one that the goldsmiths had more in sight: the bat.

Biologists distinguish each of these 33 different species, and of course, they all have their names. Now, ordinary people cannot distinguish or go into such minute details, and often use one name for all. Generically they call them, rat penà. In Catalonia the most generalized name takes the masculine form rat penat in some places, the least rat penat, and also in some Valencian places. But this is not always the case: there are certain places or Valencian regions that, although they know the name of rata penà, usually use other variants, all of them very curious and surprising.

However, of the appreciation of the Valencians, since it is a heraldic animal, which appears at the top of the crown of the coat of arms of the city of Valencia. The Valencianist intellectuals of the “Renaixença” took it as a badge, and gave the name “Lo Rat-Penat” to the “Societat d’amadors de les glòries valencianes” which they founded in 1887 with great literary success. It seems, however, that historically the bat is only a deformation produced in the 16th century, of the griffin or “drac alat” that, since the 14th century, adorned the crest or helmet of the shield of the Kings of Aragon, Valencia and Mallorca. , and Counts of Barcelona and Urgell. That “rat-penat” has also been used by the Barcelona Council of One Hundred and it is still carried by the coat of arms of Palma de Mallorca”.

My interest in the nomenclature of chiropterans in the Valencian territories arose from a conversation with my friend Tono de Ontinyent. One day I showed him a photograph on my cell phone, he stared at it and in a second he exclaimed: “Ui això és un almorsígol!” (pronounced with a voiced “s”). I have also heard the variants: ammorsígol, amorsígol and esmorsígol. It is a compound word that derives from the Latin mus,-ris, which means “ratolí”, with the adjective caeculus, diminutive of caecus,-a,-um, which means “cec”. Therefore, amorsígol literally means “ratolí ceguet” or “ratata cega”. My face was like a painting, and from that moment I began to investigate the subject, asking where I was going.

Another denomination I came across was that of ratot. This is how the people from the neighboring town of Énova name a larger kind of bat, which could be the penada d´horta rat. For the other smaller species (those of the genus Pipistrellus sp) the residents of this town also use the name of rat penà. Other places where I have been able to verify the use of the word ratot is in Alcoy, Concentaina and Peñíscola. In Alcoy it is said of someone who does not have much eyesight that he is “blind as a rat.”

There are already a lot of movies where everything is screaming and stabbing, dead people appearing, ghosts on the cover of hell, torture in darkrooms, vampires sucking blood, cellars full of cobwebs, mice that flutter and inspire all sorts of characters. cruelties. (Valls, Joan: “Terror as a spectacle”, in Cançò de Serafí, 1973, June 29).

The sheep variant is also still alive. In Carcaixent there is the toponym “Mas de Borreguello”, documented in texts from the 16th century. This variant is also used in Monòver, Pinós and Serra del Carxe (Múrcia).

The Dissabte de Glòria, at ten o’clock in the morning, redoubled the bells, as a sign of joy, after the silence of the previous day. Then the people exclaimed:

The symbol of the rata penà appears in all the sites of our territory, in the majority of the shields of Fallas, in some sport equipment, organisms, institutions, companies, public buildings, etc. But this would give him another job.