Ramón García, shepherd of Navarres I 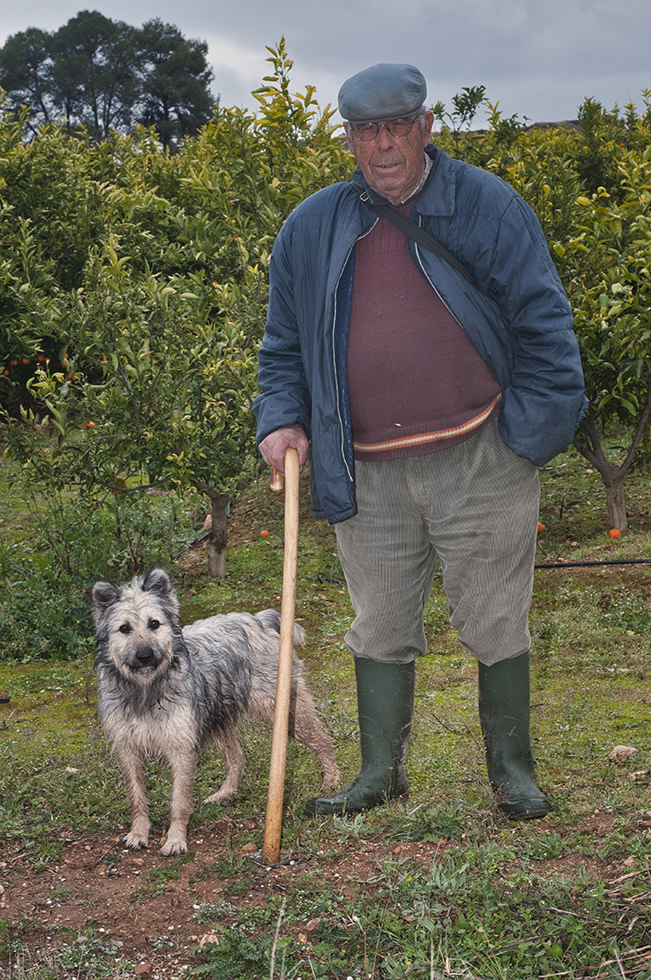 Ramón García, shepherd of Navarrés I

He accompanied Ramón and his flock along the paths of the Sierra de Navarrés, known in Valencian by the beautiful name of El laberint de la lluna plena. We leave the road that goes from Playamonte to Fuente del Pino, a mountainous area that is currently populated with chalets. Nature continues to struggle to make its way, but each time feels more drowned by the hand of man. That is why there is a constant passage of vehicles that hinder the work of the shepherd in what is his natural habitat, because we refer to a Cañada Real. We warn, with a signal from the shepherd, of the approach of the cars, but he is calm, he has managed to combine tradition, custom and modernity, so he urges calm: “calm down, this is a path, it is the Cañada Real de Almansa , the Law protects us“. But, even so, Ramón alerts the sheep with a humble gesture full of civility, despite the nervous driver who anxiously awaits his passage to take him to the main arteries where the car does not stop due to “sudden” loss of time. Ramón, on the other hand, will calmly follow his steps while giving an order to his dog, which is more of a wink than an order

At 71 years old and already retired, he continues to herd his sheep. It currently has 200 heads, and states that “as long as I use my legs, I’ll hold on…”. Vicente Talens, a retired pastor and friend of fatigues and of whom we will also speak later, corroborates his words, because he knows him well and knows of his stubbornness. He specifies that, if Ramón left the sheep, he would die in four days, because they sustain him and give him an incentive that nothing in life can provide. In fact, he continues commenting, that the sheepdogs die of grief when they stop going out to the mountains to bark at the cattle. This is your life.

My father took me out when I was ten years old and since then I have not stopped stepping on the mountain. Of course, in my own way I have been happy, but I have been cold, hot, snowed and all kinds of calamities, but the mountain makes you strong. Many times I came home foggy, without seeing anything, or wet from a storm. I don’t know how I didn’t die of pneumonia: weeds never die!”
Ramón García Saez was born in the heart of the mountains on January 24, 1939, very close to Casas de Benali, in the house of La Cameta in Bolbaite, very soon he moved to the house of El Pajarero also in Bolbaite and located in the same cordel from Benali, there he lived until he was called up for the ranks. Her birth, in the middle of the mountains, was already an omen of love for nature. Ramón talks a lot about his father, he taught him like nobody else how to make a living in the mountains. He tells me that when he was little at home they slaughtered the pig every year. It was a pig of ten or twelve arrobas. They never lacked for anything, not because there was no need, but because their parents had an enviable knowledge of all the resources that nature offered. Every morning, he and his brother went to collect a “sack of firewood” so that their mother could cook the gacha-migas1 and the gazpachos2. In the mountains, says Uncle Ramón, there are shepherds who have eaten lizards and snakes. In fact, he remembers how he and his brother hunted Uncle Marulo when they were little. The animals, yes, he feeds them with feed (alfalfa, corn and barley) and straw.

Now he is a retired shepherd who just drives his sheep near the village. When he was young he did take them far away. It was forced to carry out transhumance when the time came for the ripening of the olive and the carob until it was collected, therefore, the displacements made by the shepherds of the Canal de Navarrés and, of all those who meander along the paths of the Massif del Caroig was conditioned by this fact. Once the fruits were collected, the shepherd had the permission of the different owners to drain what was left in the field. The shepherds carried out the transhumance between July 1 and 5, so that their summer stay ended around October, once the Levantine heat had passed. He left Navarrés at the beginning of July, returning in October: All due to a law that prohibited grazing in the Navarrés district from Saint James’s day (July 25) until October, in order to ensure the harvest of these fruits, since the sheep spoiled them. So he had no other choice but to go look for the cereal fields in La Mancha, for by that time the wheat fields had already been cut down. Our shepherd, Ramón, would go out with his cattle around 5 or 6 in the afternoon and at about 11 at night the next day he would be present in the fields of Almansa. Night was his guide and companion, with no other interlocutor than the fidelity of his dog. How many mysteries and secret confessions must the night have heard? What old stories will you keep in your memories? The darkness of the night allowed Ramón to escape from the strong hours of sun and heat, what’s more, the grass of the mountains, dry at that time, did not allow many joys and, with the dew at night, they were more edible, similar to reach the manchego wheat stubble fields as soon as possible and leave these mountains behind as soon as possible. In Almansa he established his base camp in Corrales de Pétrola and Bonete. The wheat had been harvested in June and from that date the stubble was used as pasture. They were very busy routes, both for transhumance and to go alone to buy sheep from the towns and villages of La Mancha. On this second occasion when he went he left alone, when he returned, on the other hand, he returned accompanied by the bleating of a small flock of sheep. The pastoral trade is reflected in numerous ancient prose, as a model of kindness and good work:
“(…) As far as his office is concerned, although it is the office of governing and ruling, but it is very different from other governments (…) he alone administers everything that suits gray; that he grazes her, and waters her, and bathes her, and treats her, and heals her, and punishes her, and rests her, and recreates her and makes music, and protects her and defends her”1

“I remember that some years I was accompanied by Vicente Talens who came from Villanueva de Castellón with his flock to Navarrés and from there we both left the path together. These routes were also made by shepherds on foot, without their sheep, when they went to buy animals in the towns and villages of La Mancha”.

I listen attentively to Ramón reciting poems full of memories and experiences. He, meanwhile, watches the horizon and puts out a cigarette against a stone. Ramón longs for that lost time, which will no longer be and which time itself took care of erasing. From this state of melancholy, he recites to me another of his sayings that contain so much symbolic load, when on his paths he crossed through La Mancha lands. The organization in La Mancha was very different from that in Valencia, during the summer period, when the sixty shepherds of the La Mancha villages, in charge of grazing the highlands, were under the authority of the mayor and he was absent. The town remained enjoying the rights and subject to the obligations indicated by the Charter and continued to be called to order by the itinerant mayors, that is, the shepherds and guards.
We do not know how many times, guards and shepherds, met in special assemblies to hear judicial decisions of the mayors on matters of lost cattle, not even if these meetings actually existed, but it is to be assumed that it was so, due to the need that the shepherds to guard their property. It is clearly perceived that the shepherd is a man who has a lot of time, who has to organize his own affairs, since the others, oblivious to his reality, do not know the delicate nature of the wool trade:

The figure of winding the clock, under the shade of a tree, comes to mean the tranquility of those who are not in a hurry, simply have to waste time, wait for hours and hours. Suddenly, he calls the sheep that go about their business and to break his loneliness he establishes communication with the flock and his dog. Break up the nostalgic moment with something that comes to mind. It is an unfortunate event that a shepherd lived in Ayora, who after a lifetime of misfortunes and wandering alone through the desolate mountains to raise his flock, a bad lightning split him in two. He destroyed it along with a dozen sheep, because a terrible and violent storm surprised him in the open of the mountains. Ramón, without saying so, congratulates himself for having reached the end of the journey of a life full of difficulties, and, somehow and quietly, he blesses his luck.

The transhumance carried out by Ramón was the opposite of what the shepherds of the Cuenca and Teruel mountains did. The latter2 went from the interior to the winter pastures of the Mediterranean basin of Valencia, taking advantage of the good climate that these lands provided them. They started it in the months of October and November to escape the low temperatures of the plateau. They spent the winter, until the month of May, feeding their cattle in the lowlands of Valencia.

1 Del Mar, E. FR. Luis de Leon “Pastoral Life”. Models of prose literature, excerpts from the most famous Spanish writers from the fifteenth century to the present. John Chapman House, 121 Newgate Street, London, 1854, pp. 78-79.
2 The only shepherd we will talk about in this book who currently transhumances from Cuenca to Caroig lands is Fermín Muñoz.

The path that towards Ramón linked the Benali cord with the Cañada Real de Almansa: Caserío de Benali, Casa La Matea, Umbría Negra, Casa la Segurana, Casas Sujel, Almansa cemetery, Pétrola/Bonete.
Watering holes on this route: Benali, La Cebolla, Fuente La Rosa, Sujel and Segurana.
In Navarrés there were around thirty shepherds, without a doubt it was a completely profitable and valued business.